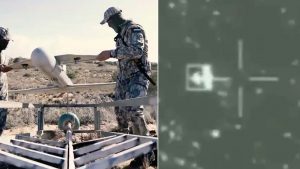 Israel has increasingly had to deal with drone threats by Hamas, and said on Thursday that it downed a UAV (Unmanned Aerial Vehicle) that crossed from the Gaza Strip into Israeli territory, like reported by meforum.org.

The new drone threat has also been showcased by Hamas in a video circulated online that shows the Palestinian terror group with several medium-size drones in Gaza. Hamas says its new drones are called “Shehab.”

Drone experts such as Nick Waters and others have pointed out the close connection between the Hamas “Shehab” and the Iranian Ababil.

The IDF has released video of the drone flying and being shot down. These drones appear to be based on Iranian Ababil drones, models of which have been exported to the Houthis in Yemen, and which the Houthis built and used against Saudi Arabia. The US has warned for years about the Iranian drone threat, including putting Iranian drones on display in Washington.

The IDF said on Wednesday that it “struck a squad of terrorists operating explosive UAV launchers belonging to the Hamas terrorist organization in the Gaza Strip. The squad was struck while they were preparing to launch the UAV into Israeli territory.”

Israel also said on Wednesday that the Iron Dome Aerial Defense System intercepted a Hamas UAV that crossed from Gaza into Israeli territory. Israel’s Defense Ministry has said that the Iron Dome system has new capabilities, developed and made operational over the years, that make it effective against drones.

Why do drone threats matter? Because drones can carry warheads and also move slowly and may be able to maneuver. Most of the Iranian-style drones, which are called “loitering munitions” or “kamikaze” drones, are the kind that can be programmed to fly to a certain destination and then sent on their way.

They are launched from a rail and can be transported on a truck or even a boat and also launched that way. They have a propeller at the back. Gyroscope technology used in the drones for guidance links Iran to the drone exports that have gone to Yemen, Iraq, Syria, and even further afield, to be used in places like Sudan, Afghanistan and Venezuela, according to various reports.

Iran used drones to attack the Abqaiq oil-processing facilities in September 2019, which appeared to be a warning to Israel. Iran also used a drone flown from the T-4 base in Syria to attack Israel in 2018. It flew into Israeli airspace and was shot down by a helicopter. Iran also advised Hezbollah to send what Israel called a “killer drone” team to an area near the Golan in 2019. Israel struck that team.

There have been numerous drone incidents on the Lebanese border, and also several on the Syrian border. In addition, Israel’s enemies have tried to shoot down Israeli drones. In March, the Israeli military said that, “during routine IDF UAV activity over Lebanon, anti-aircraft missiles were fired toward the UAV. The aircraft was not hit and continued its mission as planned.”

Last month, Israel said that troops downed a drone and located an additional drone “belonging to the Hezbollah terror organization that crossed from Lebanon into Israeli airspace.”

In addition, Israel said it struck a drone site in September connected to Hamas in Gaza. Israel said in September 2019 that “a drone infiltrated into Israeli airspace from the Gaza Strip and dropped an explosive device on a military vehicle.”

All this points to an increasing drone capability by Hamas, and this week’s conflict has seen several references to Hamas’s UAVs.

Israel uses several terms for drones, usually calling the smaller quadcopters rakhfanim, and the larger drones malatim, meaning a UAV.
The Hamas drones that resemble the Ababil will likely have a warhead on the front and some sort of guidance system. They have two sets of wings, one toward the rear and a smaller set in the front, looking like a flying fish with fins. They are slightly longer than the height of an average person.

Apparently, the design is relatively easy to manufacture because the Houthis have become experts at using drones to terrorize Saudi Arabia.

Some of these drones also have increasingly longer ranges. Concern in January pointed to a new drone based in Yemen among the Houthis, which had a 2,000-km. range that could reach Eilat.

Iran has long boasted that it has drones with ranges of thousands of kilometers, and has said it has increased the armaments it can put on the drones. That means Iran has a drone army that combines the kind of smart munition elements that cruise missiles have. And the drones can be operationalized in swarms.

Iran has also tried to copy the US Predator and Sentinel as well as other drones, adding munitions to them as has the US Reaper. However, Iran has had mixed success in this.

It also has mixed success supplying the Houthis, Hamas, Hezbollah or Iraq-based militias with a way to fly the drones with a live video feed or have them return to base. This means that Iran’s drones are still quite antiquated, and that its allies like Hamas possess drones that have outdated aspects.

Hamas drones are a threat because they can maneuver and fly low, but they still may be a blend between aspects of the old, Israeli V-1 drones from the 1980s and cruise missiles. However, it is clear Iran is exporting its technology.

Iran first began using Ababils in the 1980s against Iraq during the Iran-Iraq war. They were built at a HESA factory (Iran Aircraft Manufacturing Industrial Company) that is based on a factory once built by Textron, which constructed Bell 214 helicopters prior to 1979.

Today, the Islamic Revolutionary Guard Corps often uses the Ababil drones, and this makes sense because the IRGC’s Quds Force oversees support for Hamas, Hezbollah and the Houthis.

It is believed that pro-Iran militias in Iraq have now used drones several times against US facilities. This points to a wider drone war being waged by Iran against Israel, Saudi Arabia, the US and others.