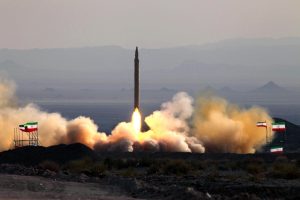 In a significant U.S. policy shift on Oct. 13, President Donald Trump disavowed Iran’s compliance with a landmark 2015 nuclear deal and unveiled a more aggressive approach to the Islamic Republic over its missile development activity.

“Iran’s ballistic missile programme will expand and it will continue with more speed in reaction to Trump’s hostile approach towards this revolutionary organization (the Guards),” the IRGC said in a statement published by Tasnim.

The Trump administration has imposed new unilateral sanctions aimed at impairing Iran’s missile programme. It has called on Tehran not to develop missiles capable of delivering nuclear bombs. Iran says it has no such plans.

Tehran has repeatedly pledged to continue what it calls a defensive missile capability in defiance of Western criticism.

“Imposing cruel sanctions against the Guards and hostile approach of the rogue and brute (U.S.) president shows the failure of America and the Zionist regime’s (Israel) wicked policies in the region,” the Guards statement said.

Iran has one of the most advanced ballistic missile programs in the Middle East, viewing it as an essential precautionary defense against the United States and other adversaries, primarily Gulf Arab states and Israel.

Signaling no respite in geopolitical tensions in the Middle East, where Shi‘ite Muslim Iran has waged a long proxy war with U.S.-allied Sunni Muslim Saudi Arabia, the Guards vowed to continue confronting the United States and Israel.

“More decisive and stronger than ever, the Guards will continue to defend Islamic Iran and its interests,” the statement said, alluding to the Quds force, the Guards’ overseas arm that operates in Iraq, Syria and Yemen among other places.