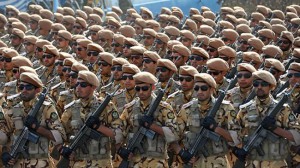 Different infantry, armored, artillery, rapid reaction, rangers and airforce units are participating in the massive wargames which is due to be held in three different geographical regions of the country for one week.

According to Pourdastan, in addition to using new equipment and weapons and their assessment, the troops are due to test advanced tactics specifically designed for fighting against proxy wars.

Defense analysts and military observers say that Iran’s wargames and its advancements in weapons production have proved as a deterrent factor.

In a recent development, the IRGC Navy ended the massive wargames, codenamed Payambar-e Azam (The Great Prophet) 9, in the Persian Gulf and the Strait of Hormuz late February.

“This new weapon plays a determining role in increasing Iran’s naval power to confront the threats, specially by the US, against the Islamic Revolution,” he said.

Different IRGC Navy vessels were used in the exercises.

On the first day of the drills, a mock aircraft carrier was destroyed by the Islamic Revolution Guards Corps missiles.

The model was built in real size and came under attack and was destroyed by missiles and rockets fired from tens of IRGC speedboats.

Also a number of the IRGC cruise and two ballistic missiles were fired at the mock US aircraft carrier.

Also during the wargames, a mobile naval target was destroyed by Fateh 110 and Zelzal missiles on a deserted island 270km away from the wargames zone.

During the first moments of the second stage of the drills, enemy drones were also hit and destroyed by Misaq shoulder-launched missiles and artilleries mounted on 100 IRGC’s speedboats.

Also, tens of IRGC vessels conducted high-speed mine-laying operations in a short period of time to get ready for critical situations in times of possible threats.

Fadavi described Iran’s “mine-laying” capability as “the most important concern of the Americans”, and said, “We have the most advanced sea mines which cannot be imagined by the Americans.”

In recent years, Iran has made great achievements in its defense sector and attained self-sufficiency in producing essential military equipment and systems.

Iranian officials have always stressed that the country’s military and arms programs serve defensive purposes and should not be perceived as a threat to any other country.