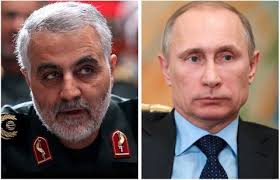 “General Soleimani held a meeting with President Putin and high-ranking Russian military and security officials during a three-day visit last week to pursue the issues raised during the (the late November) meeting between Putin and Supreme Leader of the Islamic Revolution Ayatollah Seyed Ali Khamenei (in Tehran),” unofficial informed sources told FNA on Dec.16.

They disclosed that General Soleimani and President Putin also discussed the latest developments in Syria, Iraq, Yemen and Lebanon.

According to the sources, during the meeting between Putin and his high-ranking Generals and General Soleimani, the Russian president called the IRGC Quds Force Commander as “my friend, Qassem”.

A few days after Russian entered the war on terrorism in Syria, several western media outlets claimed that General Soleimani had been in Moscow to encourage Putin to join the war.