You are here: Home / MidEastGulf / Iran’s foreign ministry not informed on Taliban group’s visit to Tehran 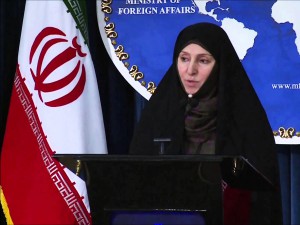 Iran’s foreign ministry is not informed about the visit of a political delegation from Afghanistan’s Taliban group to Tehran, the ministry’s spokeswoman Marzieh Afkham said.

“We have no information on the issue,” Afkham said, adding the ministry is pursuing the issue.

She made the remarks during her weekly press conference in the foreign ministry in Tehran May 20, Iranian state IRINN TV reported live.

The sources which have published the information should be found, she added.

Iran’s semi-official Tasnim news agency reported that the Taliban’s delegation has traveled to Iran to hold talks with the Islamic Republic security officials.

The delegation headed by Tayyab Agha, who is in charge of the Taliban’s political bureau in Qatar arrived in Tehran on May 18, according to the report.

The Taliban delegation has discussed regional issues in particular the recent developments in the Islamic world as well as the situation of Afghani migrants with the Islamic Republic’s security officials.

Earlier similar Taliban delegation visited Iran twice in the past to hold talks with Iran’s security officials and participating in an international conference, according to the report.

The Taliban emerged in the early 1990’s in northern Pakistan following the withdrawal of former Soviet Union troops from Afghanistan. They were in power in Afghanistan from the mid-1990s until 2001.

The hard-liner group has in recent years carried out numerous high-profile attacks on Kabul.

Taliban had announced earlier that it has established the political bureau in Qatar to stay in touch with the other countries.