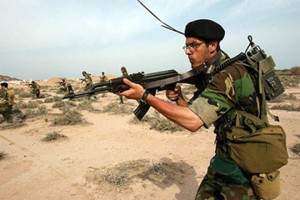 Infantry, armored and artillery units as well as drones, helicopters and fighters are involved in the drill dubbed “Prophet Mohammad 3.”

The drill includes heliborne and anti-heliborne operations as well as modern war tactics and rescue operations. The two-day drill is held with the aim of boosting preparation of the ground force units and their deterrence capacity.