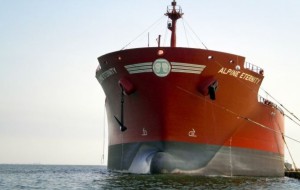 Iranian Revolutionary Guards fired warning shots May 14 at a Singapore-flagged commercial ship in the Gulf that had collided recently with an Iranian oil rig, US officials said May 14.

After hearing a radio call for help, the United Arab Emirates dispatched coast guard vessels to aid the tanker and the Iranian boats then departed the area, US officials said.

The Iranian Revolutionary Guard vessels tried to intercept the Singapore-flagged ship, the Alpine Eternity, “in order to settle a legal dispute stemming from an incident on March 22, 2015, when the Alpine Eternity reportedly hit an Iranian-owned oil platform,” a US official, speaking on condition of anonymity, told AFP.

“Iran claims that the vessel is liable for damages to the oil platform,” the official said.

The incident reflects rising tensions in the Gulf, fueled in part by the conflict in Yemen that pits Iranian-backed Shiite rebels against pro-government forces supported by a Saudi-led coalition of Sunni Arab states.
May 14 episode appeared similar to a move last month by Iran against a Marshall Islands-flagged cargo ship, the Maersk Tigris.

The Iranians seized the vessel in the Gulf after firing warning shots and cited a commercial dispute with the Danish shipping group Maersk which hired out the ship. The Maersk Tigris was eventually released after Iranian authorities said the matter was settled.

Analysts say Iran may be taking a more assertive stance after they were apparently thwarted in an attempt to deliver weapons to their Huthi allies in Yemen. An Iranian convoy of ships which was suspected of carrying arms bound for Yemen was forced to turn back after the US Navy deployed about a dozen warships to the area.

In May 14 confrontation, the Iranian patrol craft fired across the bow of the Alpine Eternity in international waters and the commercial ship then headed towards the UAE, officials said.

The Alpine Eternity issued a radio call for help and the Iranian boats fired a second wave of warning shots, the officials said.

The Iranian boats then departed the area, the US officials said, adding that there were no Americans aboard the commercial ship.

A US naval ship was about 20 miles (32 kilometers) away at the time and “monitored the radio traffic” but received no request for assistance, Pentagon spokesman Colonel Steven Warren told reporters.

Singapore’s Maritime and Port Authority said no Singaporeans were on board and that it “verified with the ship manager of Alpine Eternity that the crew members are safe and the vessel is currently in UAE waters.”
The Pentagon acknowledged it was the third incident in a few weeks involving Iranian forces confronting commercial vessels in or near the strategic Strait of Hormuz.

“This is something that we continue to watch, that we’re concerned with,” he said.

Following the seizure of the Maersk Tigris, the US Navy recently provided security for American-flagged commercial ships crossing through the Strait of Hormuz. But US commanders called it off after about a week, saying tensions had appeared to ease.

Asked if the beefed up security for the vital waterway was canceled too soon, Warren said: “We’re always in a position to reevaluate in the future.”

Twelve US naval ships, including an aircraft carrier, the USS Theodore Roosevelt, are currently in the region but no additional vessels were due to deploy to the area as a result of the May 14 incident.

“We maintain a robust presence in the Persian Gulf,” he said.

The United States has demanded that an Iranian aid ship bound for Yemen change course and head towards Djibouti, where the United Nations is overseeing humanitarian efforts for the Yemen conflict.

But a senior Iranian commander rejected the request and warned the Americans that “a fire might start” if there were attempts to block Tehran’s aid efforts.

Although Iran has said it would provide a naval escort for the aid ship, so far the vessel has no warships guarding it. The Iranian cargo ship is currently heading southwest off the coast of Oman, Warren said.

The ship in the May 14 incident, the Alpine Eternity, is an oil-chemical tanker that had last stopped at a port in Bahrain, according to the marinetraffic.com shipping website.