You are here: Home / MidEastGulf / Iranian weapons-smuggling to Yemen’s Houthis passes through 3 countries 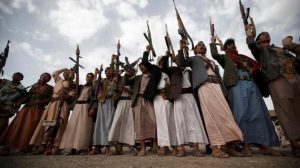 The Arab Coalition Supporting Yemen’s Legitimacy showed evidence on Monday of the Iranian tactics to smuggle qualitative weapons to Houthi militias in Yemen and modernize outdated arms, like reported by aawsat.com.

It added that the smuggling process starts from Lebanese “Hezbollah”-controlled regions in Syria, then passes through Iraq and Iran before reaching Yemen.

Tehran also supplies militias with experts and modern techniques to manufacture remote-controlled explosives-laden speedboats to use them in attacks against ships and therefore affect the navigation in the Red Sea, Gulf of Aden and Arabian Sea.

Kuwaiti expert Dr. Fahd al-Shulaimy highlighted the Iranian smuggling operations, saying that the missiles need technical skills to be launched and tools to be directed. These tools and skills are not found among the former Yemeni regime.

The development of the missiles is taking place by Iranian cadres and in cooperation with “Hezbollah”, he explained. He also noted that “Hezbollah” cadres received training in Iraq and moved to Yemen.

Shulaimy told Asharq Al-Awsat that the number of ballistic missiles is not huge because they are launched intermittently. Their aim is not to destruct specific targets, but to intimidate, restore confidence of insurgents, draw attention of the media towards them and achieve political gains.

The Arab Coalition also addressed mines planted by Houthis, revealing that around 50,000 mines were planted at the Saudi border, which represents a threat to civilians.

Furthermore, a Yemeni official said that Iran is exploiting the weak supervision on international passages near Hodeida Port to smuggle ballistic missiles through dismantling, loading and refurbishing them by 75 Iranian experts spread in several cities.