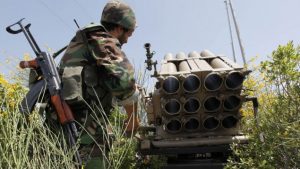 Israeli Defense Minister Avigdor Liberman issued a stern warning to the Lebanese terror group Hezbollah and its Iranian patrons over the development of rocket manufacturing installations inside Lebanon.

“We are fully aware” of the rocket factories, Liberman told military correspondents in a briefing in Tel Aviv Sunday. “We know what needs to be done… We won’t ignore the establishment of Iranian weapons factories in Lebanon.”

Still, he cautioned against overstating the threat. Since the Second Lebanon War in 2006, Israel has pulled significantly ahead of Hezbollah, he said. “There’s no need for either hysteria or euphoria on this issue.”

Asked about the spike in spillover fire from Syrian battlefields hitting the Israeli side of the Golan Heights, Liberman said the Syrian army was trying to prevent further incidents.

“There is intense fighting in recent days by rebel groups trying to regain control of Quneitra [on the Israeli-Syrian border], and a commensurate response from the Syrian army. We’re responding and will respond more forcefully” in the future, he said.

He was referring to repeated Israeli attacks on Syrian army positions in response to errant shells and other spillover from the battles in the area in recent weeks.

Israel would not set “red lines” when it came to responding to the spillover, which has seen 16 separate incidents of fire into Israeli territory in just over a week. “We have no red lines. We’ll weigh every incident separately,” but also “respond with strength” each time.

“I don’t think that in either Syria or Lebanon, where they’re aware of the depth of our intelligence, they think that it’s a good idea to test our military capabilities.”

Last month, at the Herzliya Conference, IDF intelligence chief Maj. Gen. Herzl Halevi said that “Iran has been working for the past year to set up indigenous infrastructures for producing precise munitions both in Lebanon and Yemen. We can’t ignore that, and we won’t.”

Intelligence Minister Yisrael Katz echoed Liberman’s comments on Sunday. “Israel will not sit by and watch the continuing arming of Hezbollah with advanced weaponry, and will do anything it needs to to remove this threat,” he said while visiting the USS George H.W. Bush, a Nimitz-class US Navy aircraft carrier anchored in Haifa.