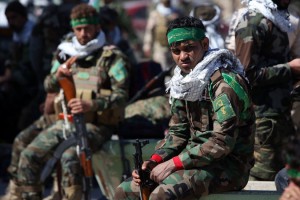 Lebanese, Iranian and Iraqi Shiite militias in unprecedented numbers have been drawn into the Syrian civil war as the Syrian government backed by Russian air power embarks on a four-pronged offensive to retake territory lost to rebels over the past four years.

Hundreds if not thousands of Iranian-trained and -equipped Shiite fighters have joined the battle, providing the government with badly needed manpower, according to a wide range of sources, including Lebanese officials, members of the Lebanese Hezbollah militia, Iraqi militia officials and reports on social media sites.

“The Syrian army was about to collapse because none of the young people wanted to do their military service and went to Europe,” said one Lebanese intelligence official speaking from Beirut. Because of his close personal and professional ties to the Syrian government, he asked that his name not be used.

“Putin brought weapons, planes and artillery, but this is never enough, you need men,” he added. “And the Iranians produced them by bringing in more from the Resistance, Iraq and even other places.” The Resistance is how many pro-Hezbollah Lebanese refer to the organization.

The early days of the Russian bombing, which began Sept. 30, primarily targeted front-line areas critical to the government in Hama, Homs and Idlib provinces in Syria’s west, far from areas that the Islamic State controls. Those airstrikes brought condemnations from U.S. officials, who said they were clearly intended to bolster Syrian President Bashar Assad in its fight with rebels who include U.S.-supplied groups and were not aimed at the Islamic State.

Then, this past weekend, thousands of pro-government fighters backed by Russian artillery, jets and helicopters launched an assault aimed at retaking Aleppo, which has been split in the years-long stalemate between the government and rebel groups. The new fighting sent tens of thousands of civilians fleeing, according to the Syrian Observatory for Human Rights, a flow that is likely to exacerbate the refugee crisis that already has sent millions fleeing to Turkey, Lebanon and Jordan.

Dr. Zaidoun al-Zoabi, head of the Union of Syrian Medical Relief Organizations, told the BBC that several villages he had visited were empty, and he saw thousands of people on the move with no shelter or medical support.

The recent influx of foreign fighters — mostly from Hezbollah in Lebanon and Shiite Muslim communities in Iraq — appears to exceed anything seen so far in the civil war and comes at a time that the Syrian government has found itself short of the manpower needed to reconquer vast areas of its country.

According to the Syrian Observatory for Human Rights, at least 52,000 Syrian soldiers had died in the civil war as of Oct. 15, more than 40 percent of a force that was estimated at 125,000 before the civil war. Another 35,000 pro-government militiamen have been killed. Fewer rebels have died, the observatory estimated, with about 81,000, including foreign fighters, killed in their efforts to topple Assad.

One U.S. intelligence official, speaking on condition of anonymity to discuss classified intelligence, said the Iraqi Shiite militias, which have been a bulwark of that country’s effort to contain the Islamic State, had been diverted to Syria under the leadership of Iranian advisers. As a result, the offensive to retake the western Iraqi province of Anbar, which is almost completely controlled by the Islamic State, has stalled.

Philip Smyth, a researcher of Shiite paramilitary groups for the University of Maryland, warned that Moscow is gambling by relying in part on Iraqi Shiite militiamen as part of the ground force, because the Iraqi militias have a poor combat record, and it remains to be seen whether they can shift the ground war in Syria in favor of the Assad government.

Early reports provide no clear answer. Anti-government activists have reported that the initial Syrian government push met fierce resistance from rebels with U.S.-made anti-tank missiles that destroyed as many as 40 government tanks. But in recent days, government forces have captured a half-dozen villages, and on Tuesday, Assad traveled to Russia, his first trip outside Syria since the civil war began.

“If they are able to concentrate in one area and in addition put together a good profile for air support from the Russians (and) on-the-ground air control from the Russians, then that would set off warning bells, because it would demonstrate unity of arms. And unity of arms we haven’t seen in the Middle East,” said Smyth.

Still, Smyth recalled that the Iraqi militias have failed to turn the tide of battle in Syria previously, including a counteroffensive in southern Syria that began last fall. Officers from Iran and Hezbollah oversaw the operation, which Smyth said was a total disaster.

“They had their shirts handed to them,” he said.

Hezbollah, which has a much more successful record fighting in Syria and against the Israelis, has manpower limitations, as the group has been forced by the Syrian situation to expand far beyond its initial formation as a small but highly disciplined force focused on the Israeli-Palestinian conflict. The Shiite community in Lebanon has grown increasingly uneasy at the number of casualties the group has taken in Syria.

The constant flow of men and weapons from Lebanon into Syria has made eastern Lebanon’s main commercial arteries targets. On Oct. 6, for example, a remotely detonated roadside bomb struck a van on a narrow asphalt road that cuts through fruit orchards and sprawling farms, parallel to the main highway in Chtaura, a major town and crossroads in the Bekaa Valley that teems with Syrian refugees and Lebanese merchants.

The occupants of the van apparently suffered only minor injuries. “They were lucky the bomb was small,” said a Lebanese construction worker who was on a nearby building site at the time of the blast.

An officer from Lebanon’s internal security forces, which has a station several hundred meters from the site, said the van belonged to Hezbollah. He noted that SUVs belonging to the militia traverse the same route several times every day.