You are here: Home / MidEastGulf / Iranian ships turn back from Yemen after standoff 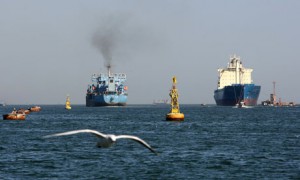 Senior defense officials tell NBC News that an Iranian convoy, believed to be carrying weapons destined for the Houthi rebels in Yemen, turned around and is headed north away from that country and toward Iran.

A potential showdown took shape Monday when American ships arrived in the Arabian Sea that U.S. officials said could intercept the convoy. An intercept also could have been carried out by Saudi Arabia, Egypt or the United Arab Emirates, which are patrolling the waters off Yemen.

Saudi Arabia has led Sunni Arab countries, supported by the United States, in carrying out more than three weeks of airstrikes targeting Shiite Houthi rebels, who are backed by Iran and have seized parts of Yemen.

The deployment came after a U.N. Security Council resolution approved last week imposed an arms embargo on leaders of the rebels.

“We have seen evidence that the Iranians are supplying weapons and other armed support to the Houthis in Yemen,” White House spokesman Josh Earnest said Monday. “That support will only contribute to greater violence in that country. These are exactly the kind of destabilizing activities that we have in mind when we raise concerns about Iran’s destabilizing activities in the Middle East.”