An Iranian supported Shi’a militia, Al-Nujaba, says it formed the “Golan Liberation Army” to fight Israel, according to newsmax.com 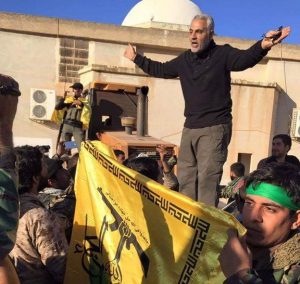 “This army has been trained and has detailed plans. If the Syria regime asks us to, we are ready to act to liberate the Golan [from Israel] along with our allies,” Al-Nujaba spokesman Hashem Al-Mousawi said in a March 8 interview with Iran’s Tasnim news agency.

Al-Mousawi also admitted that the new militant group is “part of the PMU [Popular Mobilization Units],” an Iraqi-backed umbrella organization comprised of numerous Shia militias — including some with close ties to Iran.

The Golan Liberation Army emerged from the Iranian led “resistance” axis and consists of “special forces who have received training and equipment,” he said. “Iran is the only country that has helped us,” Al-Mousawi said, “and sent us its military advisors, led by Qassem Soleimani.”

Since September of 2015, Iran increased its forces in Syria from hundreds to thousands to support Hizballah terrorists acting at Iran’s behest in propping up the Bashar al-Assad regime.

Soleimani’s Quds Force financed most of the Iraqi-Shiite militias and provided them with weapons specifically to target American soldiers. With Hezbollah’s assistance, the Quds Force supplied terrorists with powerful explosive devices that killed numerous American and coalition troops in Iraq.

Israel is very concerned with the establishment of Iranian-led terrorist bases in the Golan Heights. Hezbollah openly seeks to consolidate its presence in the region and launch attacks against Israel from a new front in a future war.