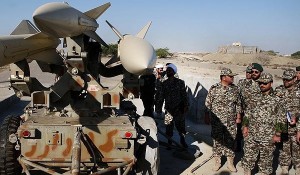 Iranian Navy Commander Rear Admiral Habibollah Sayyari announced that his forces are preparing to hold massive wargames in the Northern parts of the Indian Ocean in winter.

“The massive Velayat (94) drills will be staged in Northern Indian Ocean to the 10 degrees latitude,” Sayyari told reporters in Tehran on Monday.

He explained that the advanced equipment possessed by Iran makes it possible for the country to be in control in the Northern Indian Ocean to the 10 degrees latitude.

Also, on Sunday, Sayyari announced that his forces would hold several specialized wargames in the next 30 days.

“Several specialized drills, including missile, air and sea, submarine and special operations exercises, will be staged in the month of Azar (November 22-December 21); the massive Velayat wargames will also be held in winter,” Sayyari told reporters in Tehran on the threshold of the Navy Day in Iran (November 28).

He also referred to Iran’s presence in the international waters, and said despite certain countries’ efforts to prevent such deployment, the Navy will continue its presence in free waters, specially the Gulf of Aden.

“The IRGC Navy will hold massive drills before the end of autumn (will end December 21),” Rear Admiral Fadavi told reporters.

Defense analysts and military observers say that Iran’s wargames and its advancements in weapons production have proved as a deterrent factor.

Velayat wargames are the annual exercises conducted by the Iranian Army’s naval forces each year. Last year, the drills were conducted late December and were codenamed Velayat 93.

Different units, including surface, subsurface, air and airborne units, participated in the drills.