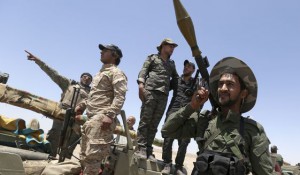 A military base in Iraq is now being shared between U.S. personnel and Iranian militias.

Two senior officials from the Obama administration confirmed that the Taqqadum military base in Anbar is being shared by each nation, Bloomberg News reported Monday.

“It’s an insult to the families of the American soldiers that were wounded and killed in battles in which the Shia militias were the enemy. Now, providing arms to them and supporting them, it’s very hard for those families to understand,” Senate Armed Services Chairman John McCain said, Bloomberg reported.

The 450 U.S. military personnel that the Obama administration is sending to Iraq will make use of the base in Anbar, but they will not train the militias, Bloomberg reported. Instead, the U.S. will provide close air support for forces as they take on the Islamic State group.

The Obama administration’s decision comes despite a report by the State Department released last week that criticized Iranian militias for human rights abuses.

“Many of these groups, such as Iraqi Hezbollah, have exacerbated sectarian tensions in Iraq and have committed serious human rights abuses against primarily Sunni civilians. Similar to Hezbollah fighters, many of these trained Shia militants have used these skills to fight for the Assad regime in Syria or against ISIL in Iraq,” the report said, Bloomberg reported.

“There’s no real command and control from the central government,” one senior administration official told Bloomberg. “Even if these guys don’t attack us … Iran is ushering in a new Hezbollah era in Iraq, and we will have aided and abetted it.”

The news outlet was unable to confirm through its senior sources exactly how many militia members are using the base. One official said their were hundreds of members using the base, while another said that most Iranian members were in the field battling Islamic State forces near Ramadi.