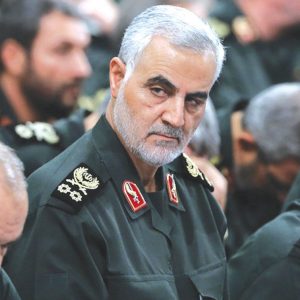 The groups are said to directly report to Gen. Qasim Soleimani, the commander of Iran’s Revolutionary Guards.

“The general personally came to Baghdad a few days ago to manage the crisis,” said a senior security official in Baghdad. “He gave the orders to brutally deal with the demonstrators, and even kill them to sow terror in the hearts of the rest.

“On his orders, Iraqi security leaders were excluded from (dealing with the protests), the internet was blocked, most local journalists covering the demonstrations were threatened and some local and Arabic satellite TV stations were set on fire.”

There have been widespread demonstrations in Baghdad and seven southern, Shiite-dominated provinces over the past week in protest against corruption, high levels of unemployment and a lack of basic daily services. They turned violent when Iraqi riot police used live bullets and tear gas to disperse demonstrators who were trying to reach government and political party headquarters.

In the past eight days, more than 180 people have been killed and 7,000 injured, including security personnel, and dozens of government buildings, political party headquarters and military vehicles have been torched, security sources said.

Video footage recorded by demonstrators and activists reveals that many of the demonstrators who were killed were unarmed and not close enough to any security services or government buildings to pose a threat.

One of the videos seen by Arab News showed a young demonstrator running through a popular small marketplace to escape his pursuers. When he stopped to talk to someone a gunman approached and, from a distance of less than a meter, shot him in the head.

In a speech on Monday evening, Iraqi President Barham Salih acknowledged that excessive force had been used against demonstrators but added that the authorities did not give any orders to use deadly force, and the killers are criminals.

“Targeting peaceful demonstrators and security forces with live bullets … is unacceptable in Iraq, which we have accepted and pledged to be a democracy in which rights and freedoms are fostered,” he said.

“The government and the commanders of the security services assure us that there were no orders to shoot, and that these abuses, the excessive violence and the targeting (of demonstrators) with live bullets, were not (the result of) a decision by the state and its agencies. Consequently, the perpetrators are criminals and outlaws.”

Security chiefs said Prime Minister Adil Abdul Mahdi ignored their recommendations not to use force against protesters as long as they did not pose a threat to citizens or the state, and to try to calm their anger. Rather than allow some time to find a peaceful solution, he ordered armed factions allied with the government to deal with the situation, security officials said.

The factions that took to the street are said to be the Badr Organization, the largest armed Shiite group, Asaib Ahl Al-Haq, Sayyid Al-Shuhada Brigades and Saraya Al-Khorasani. Security leaders, politicians and activists said these groups played a pivotal role in cracking down on the demonstrations and the killing of demonstrators.

Iraqi authorities on Tuesday blocked internet access for an eighth consecutive day in an attempt to control the protests and prevent demonstrators from sharing videos and pictures that they hope will help gain more domestic and international support.

Most Iraqi and foreign journalists and activists who were reporting on or monitoring the protests left Baghdad over the past week after receiving warnings that warrants had been issued for the arrest of dozens of them under terrorism legislation, the punishment for which includes the death penalty or life imprisonment.

The Popular Mobilization Forces is a governmental umbrella organization, established in June 2014, composed of pro-Iran Shiite armed factions and individuals who volunteered to fight Daesh alongside the Iraqi government. The Badr Organization, Assaib Ahl Al-Haq and several other factions form its backbone.

Abdul Mahdi on Sunday announced a package of policies he described as exceptional, including the creation of thousands of jobs, the construction of housing for poor families, loans for the unemployed, and the chance for thousands expelled from military service to return to their units and for volunteers to join the army. It coincided with large-scale arrests of protesters or anyone else involved in the demonstrations.

The protests in Baghdad have greatly diminished since Sunday. There are now only small groups concentrated in Sadr City, east of Baghdad, and the surrounding areas. However, they have been the deadliest in the city to date, with 57 killed and more than 1,000 wounded, 205 of whom are in a critical condition, security and medical sources said.

“What Abdul Mahdi and his allies have done to the protesters is particularly brutal,” a key organizer of the demonstrations told Arab News. “They may silence the demonstrations by force for now but we will soon return more strongly.

“Recent days have proven to us that we are alone and that all political forces have abandoned us, while others have traded us, so our next step is to resort to arms. They have left us no other choice.”