You are here: Home / MidEastGulf / Iranian forces in Syria near Golan border 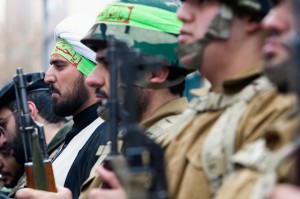 Israel is concerned with the build-up of Iranian forces in Syria, near the border with Israel,  National Infrastructure, Energy and Water Minister Yuval Steinitz (Likud) said in an interview with Army Radio on Tuesday.

Steinitz’s comments came amid the recent addition of Russian troops to Syria to bolster President Bashar Assad in his fight against Islamic State and other rebel groups challenging his rule in Syria. However, the Likud minister was more concerned with the infusion of troops from Assad’s other central backer, Iran.

“Nobody wants to see Russian forces in the area of the Golan Heights, but we definitely don’t want to see Iranian forces near Israel,” Steinitz told Army Radio.

Steinitz, speaking as Prime Minister Benjamin Netanyahu was en route to New York to address the United Nations General Assembly on Thursday, said that Israel would clarify Israel’s concerns regarding Iranian forces in Syria in discussions with the relevant parties.

“In all of our discussions, first and foremost with the United States, but also with Russia and the rest of the world powers, we must make sure that the Iranian forces will stay in Iran,” Steinitz said.

Tehran dispatched its force “in light of Assad’s” ongoing distress, the source stated, adding that the deployment is part of a wider Russian-Iranian coordinated effort to prevent what remains of the Assad regime from collapsing.

According to Israeli assessments, the Assad regime currently controls 25 to 30 percent of Syria, consisting of Damascus and the Syrian coastline, where the regime’s minority Alawite support base is centered.