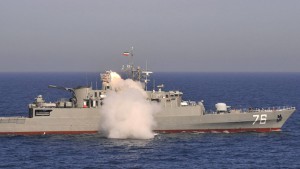 Iran’s Alborz destroyer warned two US and French destroyers in the Gulf of Aden, near Yemen.

The Iranian 34th fleet, which was passing 30 miles distance from the Gulf of Aden, was encountered with the two destroyers which sought to breach the five-mile standard distance from the Islamic Republic’s fleet, but the Alborz destroyer warned them and they were forced to change their route, Iran’s Fars news agency reported May 10.

This is the second time over the current week that the Iranian 34th fleet warns US destroyers in the Gulf of Aden. On May 5, the US Navy’s P-3C aircraft and the DDG-81 destroyer sought to breach the five-mile standard distance from the Islamic Republic’s fleet in the Gulf of Aden.

Mostafa Tajeddini, the commander of the Iranian 34th fleet said that dealing with everything that threatens national interests is the principal duty of the Iranian Navy.

He rejected comments of US defense officials on Apr.24, claiming that the fleet was moving away from Yemen, days after the US deployed warships to the Yemeni coast.

The Iranian fleet consists of the logistics ship Bushehr and the Alborz destroyer. Sayyari stated that the fleet’s mission is to secure Iran ‘s shipping lines and safeguard the Islamic Republic’s interests in the free waters.