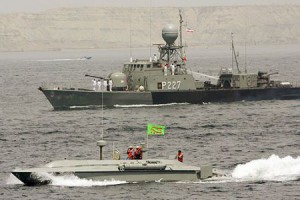 Five Iranian boats fired shots across the bow of a Singapore-flagged cargo vessel in the international waters of the Gulf on Thursday, CNN reported, citing a U.S. official.

It was unclear if the shots hit the vessel, CNN said. After the shots, the cargo vessel turned to the national waters of the United Arab Emirates, where that country protected it using its coast guard, CNN also said.

There were no U.S. personnel on the vessel, according to CNN. Reuters could not immediately confirm the report, and representatives for the Pentagon could not be immediately reached for comment.

The shots at the Singapore-flagged vessel were fired as U.S. President Barack Obama and leaders from Gulf nations were set to meet at Camp David in a rare, high-profile summit on U.S. efforts to broker a nuclear deal with Iran. The United States and five other world powers are in talks with Tehran to curb its atomic program.

Iran, currently in a standoff with a Saudi Arabia-led coalition over security inspections of its own cargo ship, last month intercepted a Marshall Islands-flagged vessel in the Strait of Hormuz. It forced that ship into Iranian territorial waters by firing shots across its bow.