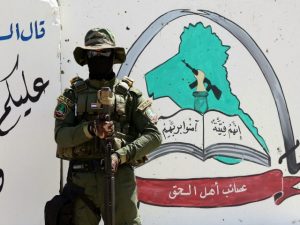 After the Iranian-backed militias of Hashd al-Shaabi took over the Yezidi majority region of Sinjar, the process of documenting the genocidal crimes against Yezidis has come to a standstill, like reported by basnews.com.

“Some of those who cooperated with the IS terrorists have now returned to Sinjar with Hashd al-Shaabi,” Khalil said, adding that those former IS members are posing a threat to the mass graves of the Yezidi victims massacred by the IS militants in the region.

The militias intend to make the crimes appear smaller than their size, said the Yezidi official.

He confirmed that the bodies of over 1,200 Yezidis are in the mass graves discovered so far.

“Those mass graves have not been exhumed yet, and all the efforts for exhuming them have come to a stop following Hashd al-Shaabi’s invasion,” Khalil added, warning that a serious threat has been posed to the mass graves in the region.

In August, 2014, the IS militants invaded Sinjar, the Yezidis’ hometown in Nineveh Plain, where they killed and abducted thousands of men, women, and children.

The region was recaptured in 2015 by Kurdistan Region’s Peshmerga forces and it was protected by Peshmerga until Hashd al-Shaabi took over the area on October 16, 2017.