The developments have made local Iraqis wary of creeping Iranian influence and Turkish intervention in an area already plagued by infighting and a combustible mix of ethnic and religious groups, like reported by jpost.com 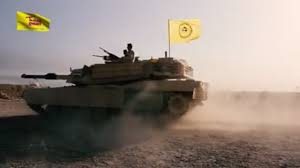 An Iranian-backed Shia militia offensive in Iraq has cut off ISIS supply lines west of Mosul but risks exacerbating tensions with Kurds in nearby Sinjar who say the operation breaches an agreement over who would liberate the area.

The developments have made local Iraqis wary of creeping Iranian influence and Turkish intervention in an area already plagued by infighting and a combustible mix of ethnic and religious groups. A regional Kurdish commander accused Tehran of wanting to “open a corridor” through Iraq to Syria.

The fighting may also complicate American goals of seeking a smooth finish to the operation in Mosul without the controversy of any Kurdish-Shia fighting or Turkish problems, especially with Turkish President Recep Tayyip Erdogan visiting Washington this week. Sinjar is increasingly a hinge that connects several conflicts in northern Iraq and the Yazidis who were victims of ISIS are once again victims of the regional politics.

The offensive in Iraq is the most important yet launched by the Iranian-backed Shia militias, known as the Popular Mobilization Units (PMU), since November, when they crossed 50 km. of desert to cut off Mosul and surround the Turkmen town of Tal Afar.

The militias aim to capture Qairawan and al-Ba’aj, two Iraqi towns held by ISIS that border Sinjar, which was liberated by Kurdish Peshmerga in November 2015.

Local news sources said the offensive has been dubbed named “Muhammad Rassol Allah 2”, and it is designed to cut off ISIS supply lines that run across the Syrian border. Since skirmishes began on Saturday the Shia militias have captured more than a dozen villages from ISIS and are within 40 km. of the Syrian border.

The fighting has a wider context. Iraqi security forces, backed by the US-led coalition, are close to conquering the last pockets of ISIS in Mosul. The PMU wants to strike Westward to bring attention to their role in the war effort. In January a PMU spokesman named Ahmed Assadi told CNN that “we’ve received information that [ISIS leader] Abu Baqr Baghdadi is hiding between the towns of al-Baaj and al-Qairawan, near the Iraqi-Syrian border.” PMU leader Abu Mahdi Muhandis was quoted by Rudaw, a local Kurdish channel, on Sunday that within 48 or 72 hours his forces would take Qairawan.

However the Shia offensive has raised eyebrows in the Kurdistan Regional Government. Peshmerga commander Sarbast Lazgin told reporters he was concerned that the PMU was advancing on former Yazidi villages near Sinjar.

“[President Masoud] Barzani is aware of violations made by Hashd al-Shaabi [PMU] and informed us that Hashd should not be allowed in there,” tweeted Baxtiyar Goran, a reporter for Kurdistan24. “Any advance of Hashd al-Shaabi in Ezidi areas is a violation of Kurdistan-Iraq agreement and is not acceptable,” the Peshmerga commander said.

The Yazidi villages between Qairawan and Sinjar were the site of many ISIS atrocities in 2014. A woman from Tal Qasab told The Daily Beast that she was captured by ISIS and witnessed mass killings by ISIS. “I saw so many corpses on the road, it was terrible. I remember one of the saddest moments there, during those terrible months, was this little girl, twelve years old. They raped her with no mercy.” Now the PMU is on the verge of taking many of these villages, including Tel Banat, Kocho and others, including the site of suspected mass graves ISIS left behind.

A local Yazidi leader said that behind the PMU offensive they fear Iranian influence. The Peshmerga in Sinjar, who initially hoped to liberate the Yazidi villages, have been distracted over the last year by internal Kurdish clashes on Sinjar between the Kurdistan Workers Party and KRG Peshmerga. In late April Turkey bombed PKK forces on Sinjar and killed five Peshmerga in error. The local politician in Sinjar says that the current advance by the Iranian-backed PMU and the presence of the PKK “will give the Turkish government pretext to intervene under the pretext of the existence of PKK and occupy the region and the biggest loser of these international and regional situations are the Yazidi.”

The PMU offensive increasingly stokes fears of a “Shia crescent” or Iranian-backed plan to increase control in northern Iraq. From the PMU’s perspective they are only intent on killing ISIS and cutting of the route to Syria. But Turkey sees PKK flags in Sinjar and threats to Turkmen in Tal Afar and wants to intervene.