You are here: Home / MidEastGulf / Iranian attack on Hamas 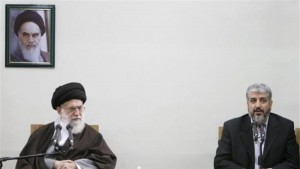 Khamenei’s circles did not hide their outrage at Hamas because of the movement’s position on Aleppo’s battle. It was clearly expressed by Hezbollah’s newspapers and media outlets in Lebanon, as well as by some Iranian newspapers and media sites, in addition to statements by Iranian officials, like reported by middleeastmonitor.com.

The attack came after a statement that was issued by Hamas regarding the Battle for Aleppo and after events were held in the Gaza Strip in support of the Syrian people during the movement’s anniversary commemoration festival. This was in addition to the steps Hamas took against some new Shia groups in the Gaza Strip – the so called Al-Sabirin group – which went too far with their insolence when they expressed their joy and celebrated the occupation of Aleppo by Iranian militias under the cover of Russian aviation.

The fact is that the debate over the relationship with Iran did not stop within Hamas, and of course that depended on the presence of remnants of support from Iran to the military wing of the movement. But the clarity of the Arab and Muslim masses’ choice during the battle of Aleppo did not give the movement a chance to stand silent; whether that was in response to its guidelines, or in response to the Sunni Arab masses, which the movement could not risk losing, or for a principled position, which is the same position that pushed the movement to leave Syria after the revolution.

There is no doubt that the blockade imposed by official Arab circles and suffered by the movement is still weighing on it and it is what has been pushing it to keep at least minimum relations with Iran. Iran also needs that relationship, not only to use as cover up for its ideological attack on the nation, but also to keep promoting the story of resistance and opposition, although it is no longer compelling to anyone, except for a few who wish to convince themselves to justify their positions.

There is no doubt that Hamas’ last position was correct and far-sighted. The movement’s loss of Arab and Islamic masses, including Palestinian ones which are in line with the nation, cannot be compensated by any benefits it can obtain from Iran, not to mention they’d be temporary benefits that are going to stop in the upcoming stage where Iran may have to change its rhetoric to face US President-elect Donald Trump’s pressure and the new equations of blackmail regarding the nuclear agreement and sanctions.

The fact is that the remnants of Iran’s support for the movement; the support that had stopped for years before shyly coming back in the last two years, is not related to the principle mentioned, but rather involves clear political intentions and anyone who embraces the Egyptian regime, ignoring its intimate relationship with the Zionist entity, and besieging of the Gaza Strip for no other reason but to collude with its aggression, does not really care about resistance in any way.

In light of this, we can say that the movement was successful in its last position, and should not hesitate in confirming it; in loyalty to its audience first, and in loyalty to the popular Arab and Islamic crowds which never kept any material or moral support from it, including the Syrian people themselves.

The Iranian anger, and the anger of the followers, is happening anyways, and as long as the movement sees itself as part of the majority and insists on it, it will continue to be in a hostile position, even if it was complimented with some support.

What needs to be said here is that countries concerned with confronting Iranian aggression must take a different stance from the movement, whether on the political level, or at the level of financial support in order not to leave it in a position where it has to ask for Iran’s support.