You are here: Home / MidEastGulf / Iranian artillery spotted near Iraqi city of Baiji 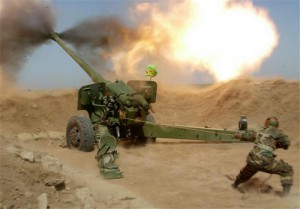 Iranian artillery has been spotted near the northern Iraqi city of Baiji as Iraqi forces and Shiite militias continue to battle the Islamic State there, CNN reports.

U.S. officials have raised concerns about the burgeoning influence in Iraq of Tehran, which backs the Shiite militias against the Sunni terrorists of the Islamic State. Now heavy weaponry from Tehran has appeared on the battlefield:

One concern for the United States is that satellite imagery shows Iranian artillery firing from a point southeast of Baiji.

However, the United States does not yet know if Iranian troops are manning the weapons or if Iran turned the artillery over to militias, the official said.

Iraqi forces have been able to punch through some outer areas to establish a supply line to a nearby refinery and are trying to increase their foothold there after losing most of the refinery ground to the Islamic State weeks ago, according to the U.S. official.

Iraqi officials in Baiji confirmed to CNN on Tuesday that, despite earlier statements, the city is not completely under the control of government forces.

Gen. David Petraeus, one of the key architects of the surge strategy in the Iraq War, told the Washington Post in March that the Iranian-backed militias—not the Islamic State—were the most serious threat to Iraq’s long-term stability.

“They have, to a degree, been both part of Iraq’s salvation but also the most serious threat to the all-important effort of once again getting the Sunni Arab population in Iraq to feel that it has a stake in the success of Iraq rather than a stake in its failure,” he said. “Longer term, Iranian-backed Shia militia could emerge as the preeminent power in the country, one that is outside the control of the government and instead answerable to Tehran.”