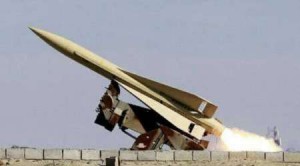 The operation, irna.ir reported, took place in the second day of drills called ‘Modafe’an-e Aseman-e Velayat 7’ which is underway in south of the country.

The missiles were successfully countered by the air defense systems used by Khatam ol-Anbia Air Defense Base which is also present in the war game.

Talking to reporters on Tuesday, the spokesman for the drills Brigadier Abbas Farajpour said the home-made Mersad and Ya Zahra-3 missiles were used today to track and target hypothetical enemies.

On Sunday, Commander of Khatam ol-Anbia Air Defense Base Brigadier General Farzad Esmayeeli said that the drills are to take place in a wide scale in South of Iran.

‘The drills will be held for three days in an area covering 496,000 km and with the attendance of Army and IRGC Air Defense Forces and navy Force support units, the Aerospace Force of the Army of the Guardians of the Islamic Revolution (AFAGIR), Army and IRGC Ground Forces artillery and picket forces’, he added.

‘F-4 Phantoms and S300 missile system will be testfired during the event’, he said.

‘The event is characterized by large volume of artillery fire and missiles shut when passenger planes are simultaneously flying overhead’ he noted.