You are here: Home / Analysis / Iranian ambitions for the Syria’s Mediterranean coast 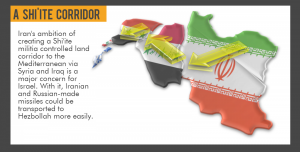 Iran has bolstered its military and economic presence along Syria’s Mediterranean coast, according to Syrian opposition sources. Companies affiliated with the all-powerful Iranian Revolutionary Guards have started to ship goods through Syria’s Latakia port, which is allegedly is also being used as an arms smuggling route, like reported by portseurope.com.

Iran’s recent leasing agreement for the container terminal in Latakia port, allows it to gain a highly strategic foothold in the Eastern Mediterranean, 322 km by sea from key Israeli port of Haifa. Israeli media claims that Iran operates a precision missile factory on the outskirts of Latakia and very close to Russian Khmeimim Air Force Base in Syria. Iran is also working on the construction of a power plant in Latakia.

Experts claim that Iran wants control of Latakia port, Syria largest, to evade American economic sanctions. Building an Iranian stronghold in Latakia is part of Tehran’s efforts to connect the Persian Gulf and western Iran with the Mediterranean Sea by road and train. Iranian functionaries have claimed that the Latakia port will be used to enable naval oil shipments from Iran to Syria.

Iran, Syria and Iraq are discussing the construction of a railway line connecting the Iran’s Imam Khomeini Port in the Persian Gulf, via Iraq, with Latakia port on the Mediterranean Sea, which from October will be leased by Iran.

The three states, heavily affected by civil wars, sectarian conflicts and international embargoes, are looking for ways to significantly increase the cargo flow between them. Iran, which is pushing for the linking of the two ports, is to finance the railway section between the Iranian city of Shalamja and the Iraqi city of Basra, the agreement for which was signed during the visit of Iranian President Hassan Rouhani to Iraq in March this year.

Iran’s presence in Syria enhances its influence on neighbouring Iraq and Lebanon, which is important to Iran because of their large Shiite populations. Syria links Iran, via Iraq, to Lebanon and the Mediterranean Sea, allowing Iran to strengthen its Shiite sphere.

A new Syrian-Iraqi border crossing at al-Bukamal is scheduled to open at the end of 2019. It is a critical point along the land corridor Iran seeks to construct from Iran, through Iraq, to Syria and Lebanon and the Mediterranean.

State-owned Latakia is Syria’s main commercial port. Its harbour is 135 hectares, has 32 wharfs, 18 cranes, its channel depth is 14.5 metres, the warehouses cover 62.8 hectares and can handle some three million tonnes of cargo a year.

In 2009, CMA CGM signed a concession agreement with Latakia Port General Company (LPGC) to manage and operate the container terminal for a period of 10 years (extendable to 15 years). The terminal is operated by a consortium composed of CMA CGM/Terminal Link (51%), and Souria Holding (49%), a Syrian limited liability company.

Speculation suggests that Russia was against the lease of Latakia port of Iran, but Tehran has provided the Syrian government with billions of dollars of credits and essential fuel supplies. Despite their cooperation, the rivalry between Tehran and Moscow is becoming visible in post-civil war Syria.

Iran has been repeatedly asking Syria for access to its ports, due to Israeli airstrikes against its shipments via Syria’s roads and airports, but under Russian pressure, Damascus did not co-operate. Now, Tehran has its own port which will help Iran move goods (according to Israel, also weapons) towards Lebanon.

The port of Latakia would become the Mediterranean link on an emerging trading route through the so-called Shia crescent from Iran through Iraq. The Shia Crescent (Shiite Crescent) is the notionally crescent-shaped region of the Middle East where the majority population is Shia or where there is a strong Shia minority in the population.

Syria also signed in April a 49-year investment contract with Russian company Stroytransgaz for the expansion and operation of its port of Tartus. A total of $500 million (€449.5 million) will be invested in the reconstruction of the port, including the expansion of the port in the north and the construction of new infrastructure. As a result, its handling capacity should increase from the current 4 million to 38 million tonnes per annum.

In 2017, Russia and Syria signed an agreement on the deployment of the Russian Navy logistics station for 49 years in Tartus. The use of the port will gives Russia influence over eastern Mediterranean. It also allows the Russian Navy to expand its technical support and logistics base, located on the northern edge of the port of Tartus.

Tartus is the Russian Navy’s only Mediterranean port facility, sparing Russia’s warships the trip back to their Black Sea bases through the Bosphorus Strait and its only overseas base. In the Syrian civil war, Russia sided with and saved the regime in Damascus.

The Tartus military facility can currently accommodate up to four medium-sized vessels but only if both of its 100 m floating piers are operational. Russia also has a fortified air force base in Khmeimim, near the port of Latakia.

OAO Stroytransgaz is a Russian engineering construction company in the field of oil and gas industry, and controlled by Gennady Timchenko though the Volga Group SICAV SIF SA fund. Timchenko is from the inner circle of Russian President Putin.

Baniyas port in Syria is also a target for Teheran. It lies between Russia’s Hmeimim air base and its sea port in Tartus. Oil pipelines from Iraq stretch all the way to Baniyas. Iran’s control of the port could be part of its efforts to circumvent U.S. sanctions by exporting Iranian oil through Iraq. Media reports claim that a million barrels of Iranian crude has been shipped to Syria in May through Baniyas. Baniyas port is 55 km (34 miles) south of Latakia and 35 km (22 miles) north of Tartus.