You are here: Home / MidEastGulf / Iran: “We won’t keep Assad in power forever” 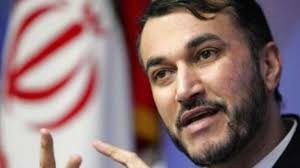 Iran will not work to keep Syrian President Bashar Al-Assad in power “forever”, Iran’s deputy foreign minister said during a trip to Britain on Wednesday, according to the AFP news agency.

It was the first visit by an Iranian delegation to Britain since the two countries re-opened their embassies in London and Tehran due to a thaw in relations.

While Iran has “no fighting force, as such” in Syria, Deputy Foreign Minister Hossein Amir-Abdollahian claimed Tehran had increased military advisors to help Assad prevail against a range of opposing forces in a civil war that has that has killed 240,000 and displaced millions.

“In any political process the role played by Bashar Al-Assad will be important,” Hossein Amir-Abdollahian was quoted as having told the Guardian newspaper.

“We are not working for Assad to stay in power forever as president. But we are very cognizant of his role in the fight against terrorism and the national unity of that country,” he added.

“The people of Syria will make the final decision – and whatever decision they take, we will endorse.”

Iran is a key ally of Assad that has stood by him since an uprising against his regime broke out in 2011, but has played down the extent of its on-the-ground support.

Near the start of the Syrian civil war, it was reported that Iran’s former Iranian President Mahmoud Ahmadinejad personally sanctioned the dispatch of officers from the Iranian Revolutionary Guards to Syria to fight alongside Assad’s troops.

But Amir-Abdollahian denied earlier this week, as he did in the Guardian interview, that his country had fighters on the ground in the Syrian conflict, though he did say Iran would step up its military support for the Syrian regime in the form of advice on fighting terrorism.

Iran’s regional rival Saudi Arabia, which supports rebel groups trying to oust Assad in Syria, this week accused Iran of “meddling” in the region, including in Yemen where Tehran is accused of backing Houthi rebels that overran parts of the country.

Amir-Abdollahian hit back at the criticism from Saudi Arabia’s foreign minister Adel al-Jubeir.

“Considering the fact that for seven months Saudi Arabia has been attempting to occupy Yemen using force, when it comes to Syria they are not in a position to make such comments,” Amir-Abdollahian said, according to AFP.

“I recommend that [Jubeir] instead of passing the buck considers cooperation and constructive behavior in the region.”

Ellwood wrote on Twitter that the three had “discussed our positions” on Syria and Islamic State militants who have brutally carved out regions of control in Syria and Iraq.