You are here: Home / MidEastGulf / Iran warns Turkey not to ‘test Iran’s patience’ with terrorism accusations

An argument between Iran and Turkey over their interventions in the Syrian civil war has grown into a clash over regional stability, with Tehran warning Ankara not to “test Iran’s patience” 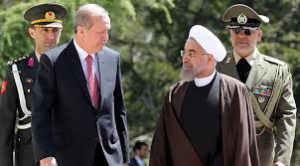 Speaking at the Munich Security Conference last weekend, Turkish Foreign Minister Mevlut Cavusoglu accused Iran of pursuing a “sectarian policy” agenda aimed at “destabilizing” the entire region, like reported by breitbart.com. In particular, he charged Iran with exacerbating Sunni-Shiite tensions in Iraq and Syria, with the goal of making both into Shiite satellites of Iran.

Reporting on Cavusoglu’s remarks, the Middle East Observer argues that Turkey has three motivations for its larger-than-expected intervention in Syria. The diplomatically stated reason is to liberate cities near the Turkish border from ISIS. The obvious but less loudly stated objective is to prevent Syrian Kurds from occupying territory along the border and working with Kurdish separatists in Turkey. The third objective, little discussed until now, is to checkmate Iran’s drive to create a Shiite hegemony in the Middle East:

Syrian rebels supported by the Turkish Army are currently advancing southward, having pushed the Islamic State out of the towns of Jarablous, al-Rai and Dabiq near the Turkish border between August and October. They are now at the gates of the town of al-Bab, and the stage is set for confrontation. The strategically important city is held by the Islamic State but coveted by others: the United States-backed P.Y.D. closing in from the east, and the Syrian Army and Iranian-allied forces from the south.

Iran’s response to Cavusoglu’s accusations was swift and vehement.

Those who have immature dreams about rebuilding an empire, and have taken meddlesome, illegal and illegitimate measures, supported terrorist groups and caused bloodshed and escalation of tensions and instability in the region cannot evade liability for such moves by playing a blame game. They should be aware that insecurity and instability in the region has no perpetrator other than them and some other paranoid states.

Iran, like the Syrian government, routinely accuses foreign powers of supporting terrorism if they supported any rebel faction in the Syrian civil war. Turkey has also been accused of indulging the Islamic State in the past, for example, by allowing ISIS recruits to pass across its border with Syria.

“The Islamic Republic of Iran’s regional policy has always been and will be based on maintaining the stability and security of all countries and neighbors,” Qassemi insisted.

Qassemi called Cavusoglu’s remarks “counterproductive” and reiterated the charge that Turkey “cannot escape from the self-created whirlpool by accusing others.”

More ominously, he warned Turkey not to “test Iran’s patience.”

Iran was so angry that it summoned the Turkish ambassador in Tehran on Monday to complain about Cavusoglu’s comments. “We will be patient with their positions, but there is a certain cap to our patience,” Qassemi repeated on Monday.

It is neither acceptable nor comprehensible for a country, which does not even hesitate to push to the battlefield refugees seeking shelter from crises, accuses others of being responsible for regional tensions and instability… Iran should take constructive steps and review its regional policies instead of putting the blame on countries which criticize it.

The Tehran Times notes another point of contention between Iran and Turkey is the latter’s support for creating “safe zones” in Syria to accommodate civilian refugees. “The idea is wrong and unacceptable to us as it adds to problems,” Qassemi said on that point.

Of course, the Tehran Times sees the “anti-Iran regional front led by Saudi Arabia, Turkey, and Israel” as the obstacle to “an immediate end to conflicts in the region.”

There’s no question a regional front is shaping up against Iran. The Jerusalem Post reports that both Saudi and Israeli representatives at the Munich Security Conference warned about Iran’s threat to regional stability, just as Turkey did.

Israeli Defense Minister Avigdor Liberman explicitly called for an alliance between Sunni states and Israel to thwart Tehran’s ambitions, warning that “their main destination at the end of the day is Saudi Arabia.”

However, while Saudi Foreign Minister Adel al-Jubeir agreed that Iran was “rampant in its support of terrorism” and posed an existential threat to his country, he declined the opportunity to embrace an alliance with Israel publicly.