You are here: Home / MidEastGulf / Iran vows to take revenge on IS militants over death of commander 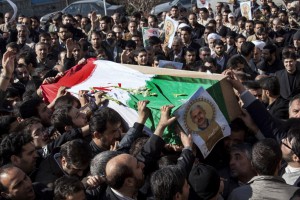 Iran‘s defense minister said that the militants of the Islamic State (IS) will be revenged for the death of Iranian prominent commander recently killed in Syria, Mashreq daily reported on Saturday.

“With no doubt, the co-fighters of Hossein Hamadani will continue his path and will take revenge by uprooting the terrorist group of the IS,” the Defense Minister Hossein Dehqan was quoted as saying.

Iran has confirmed that the commander of Iran’s Islamic Revolution Guards Corps, Gen. Hossein Hamadani, was killed by the IS in Syria on Thursday. He was recently serving in Syria as both an advisor to the Syrian government and as an overseer for operations of the pro-Syrian army forces.

His martyrdom will be a turning point in the struggle of the resistant front against the terrorist groups supported by the Zionist regime of Israel, Dehqan said.

Iran, the staunchest regional ally of the Syrian government, was said to have been sending military advisors and training Shiite militants to fight alongside the Syrian forces in the face of Jihadi groups in the war-torn country.