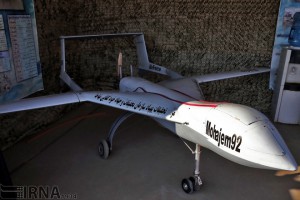 The drone can fly for six hours and its operational range covers the distance of 100 kilometers, Iran ’s Tasnim news agency reported Sept. 23.

It is reportedly designed for reconnaissance operations at sea.

The first Iranian medium-altitude long-endurance UAV, the Shahed-129 was unveiled in September 2012, which is capable of carrying out combat and reconnaissance eight missions for 24 hours and has a range of 1,700 km.

The country unveiled its largest yet homemade UAV, titled ‘Fotros’ in 2013. Fotros has a range of some 2,000 kilometers and is capable of launching air-to-surface missile strikes.