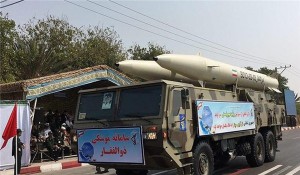 Zolfaqar, the latest generation of Iran’s long-range missiles, which was unveiled in the Southern port city of Bandar Abbas during the nationwide parades of Armed Forces, is capable of carrying Multiple Reentry Vehicle (MRV) payloads and can rains down missiles on ground targets with a high level of precision-striking power.

The Khatam 5 and 7 missile systems enjoy high mobility and can trace, track and destroy targets with a high level of maneuverability.

The Islamic Revolution Guards Corps (IRGC)’s recently-unveiled Martyr Nazeri vessel, capable of being sent to far-distance missions with no need to refueling and carrying helicopters, also sailed in Iran’s territorial waters in the Persian Gulf during the parades.

Scores of other new products including different types of modernized tanks, armors, missile and rocket launchers, electronic, communications and CentCom systems as well as the long-range S-200 and S-300 air defense missile systems, mid-range Shalamche and Mersad missile systems and various naval vessels and coast and sea-based weapons systems went on display in the parades in the Southern port city of Bandar Abbas today.

Iran has made giant advancements in developing long-range missiles in recent years.

The IRGC fired 2 home-made ‘Qadr H’ ballistic missiles from the Eastern Alborz Mountains at a target in Iran’s Southeastern Makran seashore some 1400km away in March.

The missiles were fired on the sidelines of the main stage of the IRGC drills in Central Iran and various parts of the country.

One missile had a message written on it that said in Hebrew: “Israel should be wiped off the Earth”.

Qadr is a 2000km-range, liquid-fuel and ballistic missile which can reach territories as far as Israel.

The missile can carry different types of ‘Blast’ and ‘MRV’ (Multiple Reentry Vehicle) payloads to destroy a range of targets. The new version of Qadr H can be launched from mobile platforms or silos in different positions and can escape missile defense shields due to their radar-evading capability.

A Multiple Reentry Vehicle payload for a ballistic missile deploys multiple warheads in a pattern against a single target. (As opposed to Multiple independently targetable reentry vehicle, which deploys multiple warheads against multiple targets.) The advantage of an MRV over a single warhead is that the damage produced in the center of the pattern is far greater than the damage possible from any single warhead in the MRV cluster, this makes for an efficient area attack weapon. Also, the sheer number of warheads make interception by Anti-ballistic missiles unlikely.

Improved warhead designs allow smaller warheads for a given yield, while better electronics and guidance systems allowed greater accuracy. As a result MIRV technology has proven more attractive than MRV for advanced nations. Because of the larger amount of nuclear material consumed by MRVs and MIRVs, single warhead missiles are more attractive for nations with less advanced technology. The United States deployed an MRV payload on the Polaris A-3. The Soviet Union deployed MRVs on the SS-9 Mod 4 ICBM.

Addressing the Wednesday parades, Chief of Staff of the Iranian Armed Forces Major General Mohammad Hossein Baqeri underlined that the United States’ largest military aid package in its history ($3.8bln) to Israel has persuaded Iran to further advance and increase its defense power.

“The criminal (US’) move to sign an agreement to present a supportive military package to the Zionist regime is a desperate attempt to protect the security vacuum of the regime and makes us more determined to increase our military power,” General Baqeri said.

The top commander stressed that Iran will continue designing and building different defense systems and equipment for the naval, ground and air force units as well as producing different types of missiles, reiterating that the country’s military tests and wargames will also continue according to the timeline.

General Baqeri underscored that Iran is precisely monitoring enemies’ moves, and said the Armed Forces analyze and foil the regional and trans-regional enemies’ moves before hostile actions are taken.

“The Islamic Republic of Iran considers regional security and stability as its own security and doesn’t have any greedy eyes on others’ territories and is no threat to any regional state,” he added.