Iran’s President Hassan Rouhani says the Islamic Republic stands as the “ultimate force” in the region and the entire world against terrorism, adding that the international community is well aware of the nation’s true nature 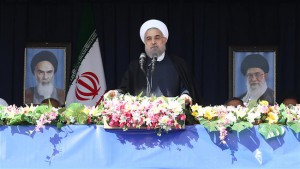 He made the remarks during an address to a large gathering of people in the northwestern city of Qazvin on Wednesday.

“Gone are the days when Iran would be accused of supporting terrorism and the Iranian people would face other accusations such as building nuclear bombs as the true nature of the nation has come to light for the world,” he said.

Iran has managed to retain its security, despite the chaos bubbling up throughout most of the region. The country has also successfully lent advisory support to Iraq and Syria in their fight against foreign-backed militancy.

Rouhani said, so far this year, he had met with 22 world leaders, all of whom had first and foremost congratulated the country on preserving its national strength in the face of world powers, with member states of the Non-aligned Movement having termed the victory as one not only for Iran, but also for the developing world.

He was referring to the country’s signing a nuclear deal with world powers in Vienna last year, which put an end to the West’s dispute over Iran’s peaceful nuclear program.

During the talks leading to the agreement, the country told the world that advanced technology cannot remain the monopoly of a certain number of countries, Rouhani asserted.

“Not only did we defend the Iranian people’s right, but also we defended the rights of all of the world’s freedom-seeking nations,” the Iranian chief executive concluded.