You are here: Home / MidEastGulf / Iran to ship 9k tons of enriched uranium to Russia in coming days 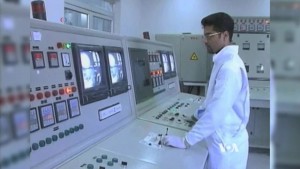 Tehran will export 9,000 tons of enriched uranium stockpile to Russia within days, according to the head of Iran’s nuclear agency. The move is part of what Iran agreed to in the nuclear deal struck in July.

“In the next few days around 9 tons of Iran’s enriched uranium will be exported to Russia,” Ali Akbar Salehi, head of Iran’s Atomic Energy Organization (AEOI), said on Saturday, according to Iranian news agency IRNA.

Under the nuclear deal, Tehran has to limit its stockpile of enriched uranium to around 300 kilograms (660 lbs), mothball most of its centrifuges as well as remove the core of a heavy water reactor at Arak to ensure it cannot produce plutonium.

The enriched uranium stockpile will be swapped for yellowcake, unenriched uranium compound, already supplied by Russia. The yellowcake is of non-military use only, which ensures Iran’s nuclear program is peaceful.

Earlier on Thursday, Salehi told reporters the enriched uranium is “low-grade” and will be shipped to Russia “under IAEA supervision,” citing the UN atomic agency’s decision to clear Tehran from possible military dimensions (PMD) of its nuclear program, according to IRNA. He also specified that the IAEA inspectors are present to ensure the agreement is observed at the Arak nuclear reactor.

The closure of PMD and Tehran’s willingness to cooperate on enriched uranium was welcomed by IAEA head Yukiya Amano, who congratulated his Iranian counterpart Salehi the same day in a telephone conversation. In response, Salehi said, quoted as saying by IRNA: “We are making efforts to do our part in such a way that the nuclear deal be implemented within two weeks.”

The nuclear deal, or Joint Comprehensive Plan of Action, is a framework agreement announced in July 2015 between Iran and a group of world powers known as the P5+1, including the permanent members of the UN Security Council – the US, the UK, Russia, France, and China – plus Germany. It binds Iran to an obligation to close all enrichment facilities other than the one in Natanz, redesign heavy water facilities into a research center and also agree on extensive monitoring by IAEA. In exchange, Tehran will potentially enjoy the lifting of economic and financial sanctions imposed by the US and the European Union, as well as some of the UN.