You are here: Home / MidEastGulf / Iran to receive S-300 missiles ‘by the end of the year’ 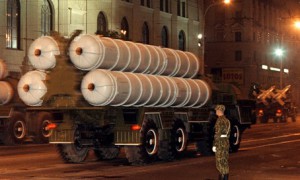 Iran is to finally receive Russian-made S-300 air defense missile systems by the end of this year, according to the pro-Kremlin Interfax news agency.

The Russian shipment to Iran has been the source of major contention, and threatens to destabilize the already fraught region. Israel in particular objects to the transfer of the advanced missile system, which would render Tehran’s controversial nuclear program almost impervious to attack should the regime decide to resume its illegal nuclear weapons program.

As a result, and despite the deal having long been sealed, delivery of the missiles and batteries themselves have been repeatedly delayed by Moscow.

Highlighting the politically-delicate nature of the deal, last week Iranian officials were forced to hastily backtrack on claims they had already begun receiving shipments of the S-300 system, clarifying that the missiles were in fact to be received at a later date.