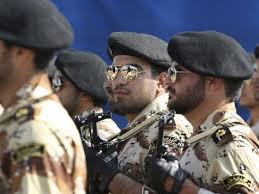 Iran has begun to deploy troops to Syria to take part in a major ground operation aimed at pushing toward the Turkish border, according to a leading pro-Hezbollah daily.

“These [troops] will join the Syrian armed forces and Hezbollah groups in carrying out a ground campaign, which aims, in its first phase, to recapture areas in northwest Syria,” the newspaper’s editor-in-chief Ibrahim al-Amin wrote in a column Tuesday.

“The step taken by Iran reflects the direct role Tehran will play alongside the Syrian army to implement a wide ranging ground operation.”

Field sources told the daily that an unprecedented number of troops is being massed on the northern fronts adjacent to all of the militant positions from rural Hama to the Al-Ghab Plain, southern rural Idlib, the Jisr al-Shughour area and the area next to rural Latakia.

According to the sources, the preparations show that a large operation is “very near” to the deadline of its launch, and will include all of these areas.

The Al-Akhbar report also said that the commander of the IRGC’s Quds Force, General Qassem Soleimani, arrived in the area two days ago and is following the direct supervision of preparations in both Syria and Iraq.  On October 1, Reuters reported that “hundreds of Iranian troops” had arrived in Syria to take part in a major operation in the country backed by Russian airstrikes.

“It is possible that the coming land operations will be focused in the Idlib and Hama countryside,” a source told the news agency.

Russia began its aerial bombardment campaign in Syria on September 30, striking rebels in the Homs, Hama, Latakia and Idlib provinces while also claiming to have hit ISIS targets further east.

Despite Moscow’s claim it was hitting ISIS, most of its airstrikes have been conducted in coordination with Syrian regime ground operations against rebels in the northwest of the country.

The Al-Akhbar report went into details on the operational goal of the Iranian military intervention, which plans to push through rebel-held areas in northwest Syria.

The newspaper’s editor-in-chief said that the offensive aims to achieve full control of rural Hama, the Al-Ghab plain that lies alongside the regime’s coastal heartland, parts of the Idlib province and northeastern Latakia, as well as other locations in northern Homs.

Al-Akhbar added that the third phase of the offensive will focus on reaching the Turkish-Syrian border “to meet up with the [Kurdish] YPG in certain northern areas.”

The YPG controls the de-facto autonomous Kurdish region of Afrin northwest of Aleppo, where Kurds have fought intermittent battles with Islamist groups, including the Nusra Front.

According to Al-Akhbar, the Iranian forces will be made up of units specialized in armored vehicle weaponry and assault operations, as well as infantry units and special groups whose task will be to carry out reconnaissance.

“Among the members of this force, there will be an additional group supporting the intelligence team… responsible for feeding combat units with information. [This includes information] received by Russia for its air operations and [information] concerning the ground operations that will be under the command of the Syrian army.”

“We will witness great victories in Syria in the next few days,” the IRGC leader said in a ceremony Monday.

Syrian rebels swept into control of the Idlib province in the summer, threatening regime positions in Hama to the south as well as the Latakia province to the southwest. Since then, reports have emerged of limited Iranian military operations south of Idlib to shore up the regime’s defensive lines.

In late May, Qassem Soleimani visited the frontlines in Hama and vowed a “surprise,” however Iran has not conducted any large scale deployments in Syria, relying instead on Shiite militia forces.