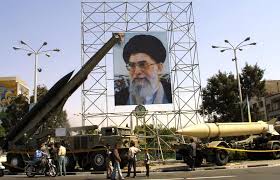 Iran has threatened European troops in the Middle East, warning: “Today, the American soldier is in danger, tomorrow the European soldier could be in danger”, like reported by telegraph.co.uk.

Hassan Rouhani, Iran’s president, made the threat at a cabinet meeting a day after Britain, France, and Germany moved to take a harder line against Iran’s escalating violations of the nuclear deal.

Iran had already said it would target US troops in the region in retaliation for the killing of General Qassim Soleimani but Mr Rouhani’s comments mark the first time Iran has threatened European troops.

Britain has around 400 troops in Iraq and around 1,000 in Afghanistan as well as others deployed across the region.

Meanwhile, Rob Macaire, the UK ambassador in Tehran, has left the country for the first time since his arrest last week. UK officials said it was a pre-planned trip to London and that he would return to his post in Tehran.

Mr Rouhani’s comments came as Iranian protesters continued to take to the streets in anger after the Revolutionary Guard admitted after several days of false denials that it accidentally shot down a Ukrainian airliner and killed all 176 aboard.

In a sign of growing tensions between the democratically elected Rouhani government and more hardline Revolutionary Guard, Javad Zarif, Iran’s foreign minister, said the people “were lied to” over what happened in the air disaster.

Mr Zarif and Mr Rouhani said they were kept in the dark about the real cause of the crash for several days as the Revolutionary Guard falsely denied shooting down the plane. They have tried to steer public anger towards the Guard and away from the government.

“In the last few nights, we’ve had people in the streets of Tehran demonstrating against the fact that they were lied to for a couple of days,” Mr Zarif said.

US President Donald Trump pulled the US out of the nuclear in 2018 and reimposed crushing sanctions on Iran. Over the last year, Iran has been gradually violating terms of the nuclear deal in protest at the US action.

Tehran took its most drastic step on January 5, days after Soleimani’s death, announcing that it would no longer adhere to limits on uranium enrichment, a rule designed to stop it from obtaining a nuclear weapon.

Britain, France, and Germany – known as the E3 – have long supported the nuclear deal but announced on Tuesday they formally accused Iran of breaking its commitments and triggered a dispute mechanism under the agreement.

The decision means the two sides have 60 days to negotiate an agreement to resolve the dispute. If they cannot, UN sanctions on Iran that were suspended under the deal may “snap back” into place.

Iran reacted with fury to the E3 announcement and said Europe had been failing in its own commitments under the nuclear deal and giving in to Mr Trump’s “diktats”.

Mr Trump has oscillated between saying he wants Iran to return to the negotiating table to thrash out a stricter deal and saying he doesn’t care about negotiations as long as Iran doesn’t try to obtain a nuclear weapon.

Boris Johnson attempted to woo him on Tuesday by suggesting that the president negotiate “a Trump deal” to replace the current one negotiated by the Obama administration.

The suggestion apparently appealed to Mr Trump who tweeted his approval. “Prime Minister of the United Kingdom, @BorisJohnson , stated, “We should replace the Iran deal with the Trump deal.” I agree!”