You are here: Home / MidEastGulf / Iran takes a pole position in the Syrian killing ﬁelds 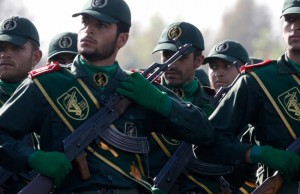 On the far side of the Syria-Turkish border crossing, tens of thousands of refugees from Aleppo and neighbouring towns are gathering, with no way forward and no way back.

The 300,000 people who failed to escape the city face death by starvation or bombardment.

With this siege, the tide of the war has turned decisively in favour of the Russian-Iranian alliance standing behind Bashar Assad’s regime – and Israel certainly cannot afford to look away.

Although Russian air power has been key to the successes of the Shia ground forces, President Vladimir Putin is not interested in playing a role in the actual governance of Syria.

Meanwhile, Daesh, the first player to take advantage of the power vacuum in Syria, is slowly losing ground, and much of its oil revenue, as a result of coalition air strikes. This leaves Iran as a potential power-broker – even though its Al Quds force, along with its proxies Hizbollah, has been badly mauled in the fighting.

Such an outcome would be deeply concerning for Israel. As Iranian leaders promote Holocaust denial and issue covert threats against the Jewish state, the Islamic Republic and Hizbollah continue to try to establish their presence on the Golan through local terror cells.

In two air-strikes last year attributed to Israel, senior Iranian and Lebanese commanders involved in the Golan plans – including Hizbollah’s Jihad Mughniyeh, murderer Samir Kuntar and Iranian general Mohammad Ali Allahdadi – were killed. This set back the plans but the Iranians will continue pressing.

Israel has quietly been supporting more moderate rebel groups on the Golan, mainly through medical assistance, in the hope that a buffer zone will keep both Daesh and Hizbollah away.

Last week, Major-General Nitan Alon, commander of the IDF’s Operations Branch, said that Israel was an effective part of the coalition against Daesh and that it shared intelligence with other nations fighting the terrorists. “We see Daesh as our enemy,” he said.

On the other hand, last month, Defence Minister Moshe Yaalon said: “Iran is worse than Daesh”.

Israel’s strategy in Syria, beyond the interdiction of Hizbollah weapons convoys, is now to try to drive a wedge between Iran and Russia. Israel is using the close ties developed over the years with the Kremlin to retain a degree of leverage over events in Syria.

“The geopolitical change is incredible,” said former Israeli air-force Brigadier-General Avraham Asael. “When I was a young pilot, we flew against Russian pilots who were supporting the Egyptians.

“Today, we are co-ordinating with the Russian air force over Syria.”

The other side of this geopolitical coin is that Israel now realises that its main allies in the West, the United States and Britain, are not going to intervene in Syria.

Meanwhile, the Russian-Shia campaign is set to prolong the Syrian war and, in doing so, extend the abject misery for the country’s civilians.

With Iranian and regime forces almost completely surrounding Aleppo, just one road allows people to leave the city and supplies to enter.

Bahaa al-Jabali, a local activist, said: “If the regime closes the last supply line, the food could run out in a matter of days.”

Four months of intense Russian air-strikes on rebel strongholds have weakened the rebels’ resistance and, according to Israeli intelligence sources, given the Syrian army the ability to “come back from the dead”.

The war in Syria is, of course, nowhere near ending. The rebels still hold significant strongholds in the north and south, while Daesh continues to control much of Syria’s east.

Despite the Russian air cover, the Assad regime and its supporters still lack the manpower to launch large ground offensives to regain those territories.

The regime will probably make do with besieging Aleppo for months rather than directly take on the 30,000 rebel fighters in the city.

A diplomatic solution is unlikely and the war will probably drag on for years, creating further humanitarian crises both within Syria, where at least half the population has been displaced, as well as in Turkey, Jordan and Lebanon.

Retired Brigadier General Mike Herzog commented: “Recent developments in northern Syria – as Russia bombs its way to a non-existent solution and provides an air umbrella to Assad and his Shiite allies – are likely to undermine the diplomatic efforts and prolong the war.”