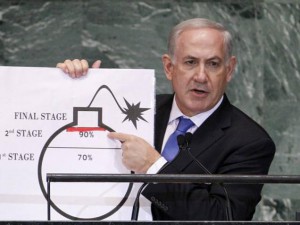 Iran will continue to destabilise the Middle East and spread terrorism throughout the world, Prime Minister Netanyahu’s office warned after world powers decided to lift sanctions against Iran over its nuclear programme.

“Israel will continue to monitor Iran’s negative activities and will take all necessary measures to maintain its security and defend itself,” the Prime Minister’s Office said.

It warned that “Iran has not abandoned its aspirations to acquire nuclear weapons and continues to destabilise the Middle East and spread terrorism throughout the world.”

The historic nuclear accord between Iran and six major powers, struck in July last year, entered into force on Saturday as the UN confirmed that Tehran has shrunk its atomic programme.

Israel tried to prevent the accord, arguing the deal would not stop Tehran from developing an atomic weapon if it wished.

Iran has always denied the charge that it was seeking to build a nuclear bomb.

Unless there is an appropriate response to each Iranian violation of its deal with the six world powers “Iran will surmise that it can continue to develop nukes, destabilise the region and spread terror,” the prime minister’s office warned.

Israeli Public Security Minister Gilad Erdan said the deal’s implementation marks “a new and dangerous time in which Iran is free of most economic sanctions without having to stop its nuclear plan and without having to give explanations about its military activity as it had to in the past.”

“This is a difficult day for all the countries in the region, which hoped that Iran will not be able to obtain nuclear weapons and stop its negative intervention in the area,” he was quoted as saying by Jerusalem Post.

“Israel will continue following and demand from the international community not to ignore Iranian violations, in order to ensure that they won’t be surprised like in the case of North Korea.”