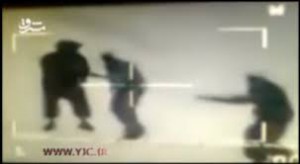 Footage allegedly showing a Hezbollah sniper taking out Islamic State (Isis) militants has turned out to be gameplay footage from video game Medal of Honor.

The video, which was picked up by Iranian state TV and has since been circulated on media outlets in the Middle East, shows a sniper taking out several targets at long range with a series of headshots. Iranian media claimed that the highly-skilled shooter, who takes out six enemies in under two minutes, was a member of Hezbollah using an Iranian Arash rifle to eliminate Isis members.

However, it’s now been noted that the footage bears a striking resemblance to a video uploaded to YouTube in 2012 showing gameplay footage from first-person shooter Medal of Honor. Upon closer inspection, you can even see the icon at the bottom of the screen that appears in the game when a player successfully executes a headshot. Plus, the footage was quite clearly shot on a mobile phone pointed at a television.

Here’s the footage in question:

Now, compare this to the gameplay footage uploaded to YouTube in 2012. Pretty similar, isn’t it?

This isn’t the first time video game footage has been mistaken for real life. In October 2015, an Egyptian news station broadcast what it claimed to be Russian air strikes on Isis targets which turned out to be footage from 2010 Activision game Apache Assault. In July 2014, RT.com used images from Metal Gear Solid 5: The Phantom Pain in a piece about child soldiers.

While embarrassing, at least these gaffes are testament to how far video game graphics have come in recent years.