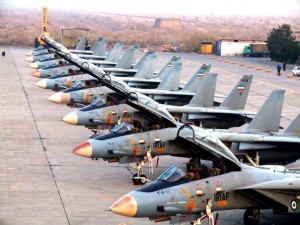 A whole range of homegrown missiles and bombs will also be used in the war game, including smart heavy and semi-heavy bombs, as well as laser and radar-guided missiles, Roozkhosh said.

The drill, which will be carried out in three phases over an area of 400,000 square kilometers, aims to improve commanders’ skills, upgrade systems, test different defense achievements and demonstrate the military prowess of the country.

On Friday, Iran’s Air Force Commander Brigadier General Farzad Esmaeili said his country keeps a close watch on the enemy’s aerial threats in distances as far as 3,000 kilometers outside the country’s borders.

Iran’s “defense line” is not confined to the geographical borders, and thanks to the homegrown air defense gear, Iran’s air defense can detect the “enemy’s breath” in distances above 3,000 km, Esmaeili was quoted as saying by Tasnim.