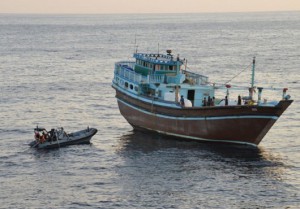 Somalia’s Al-Shabab Islamist militants have captured an Iranian fishing boat and its crew after it was forced to put into port due to mechanical failure, Iran’s Fisheries Organization said Thursday.

“The 14 crew of the vessel are now in captivity and some of the Al-Shabab militants are on board” the privately-owned boat, fisheries chief Hassan Salehi said, quoted on state television’s website.

According to online magazine WorldBulletin.net, the incident took place Wednesday and the Iranian crew were being held “at the port town of El-Dheer in Galgadud region”, north of Mogadishu.

The report comes after an Iranian fishing boat was captured in March by pirates in Somali waters, in their first successful hijacking in almost three years, according to a UN official.

At its peak in 2011, Somali pirates were responsible for the hijacking of 28 vessels and 237 incidents, but international navies and armed guards on ships reduced attacks.