You are here: Home / MidEastGulf / Iran says US drone kills 2 advisers in Iraq; US denies claim 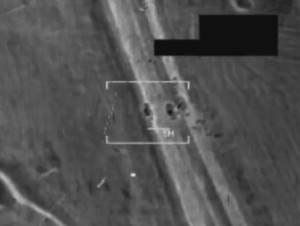 Iran’s Revolution Guard says a U.S. drone strike has killed two of its advisers in Iraq, though the U.S. said Monday it has only struck militants in its campaign against the Islamic State group.

The claim came as negotiators on Monday attempted to reach a deal on Iran’s contested nuclear program, which hard-liners in the Islamic Republic have opposed as giving away too much to the West.

The Guard said on its sepahnews.ir website the strike happened March 23, just after the U.S.-led coalition began airstrikes to support Iraqi forces trying to retake the Islamic State-held city of Tikrit. It identified the dead as Ali Yazdani and Hadi Jafari, saying they were buried Sunday. It called them advisers, without elaborating on whether Iran contacted Iraqi or U.S. forces after the strike.

The U.S.-led coalition began a campaign of airstrikes and reconnaissance missions around Tikrit, Saddam Hussein’s hometown, on March 21.

Reached by The Associated Press, the U.S. Embassy in Baghdad said: “The international coalition is aimed at Daesh only,” using an alternate Arabic acronym for the Islamic State group.

“All airstrikes are carried out through the alliance with the Iraqi government and in full coordination with the (Iraqi) Ministry of Defense,” the embassy said, without directly addressing the Iranian claim.

The Islamic State group now controls a third of both Iraq and neighboring Syria. The U.S. began airstrikes against the group in August, while Iran has offered advisers and other assistance to Iraq to fight the extremists.