You are here: Home / MidEastGulf / Iran says its elite forces’ boots on ground in Syria, Iraq 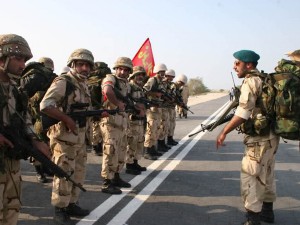 A senior Iranian commander has confirmed that a special unit of the ground forces of Islamic Revolution Guards Corps (IRGC) is involved in clashes against “extremists” in Iraq and Syria.

“Saberin unit and other units of the ground forces were dispatched to the region to prevent [extremists] from invading the shrines of Zaynab [a daughter of first Shia Imam Ali in Syria] and the Ahl al-Bayt [a term that refers to the Islamic prophet Muhammad’s family in Shia Islam and Alevism] in Iraq,” Fars news agency quoted Brigadier General Mohammad Pakpour, the commander of the IRGC Ground Forces, as saying Feb. 18.

The Saberin is a special unit of the IRGC, established in 2000. It has been involved in military operations against several armed opposition groups in Iran’s north-western and south-eastern borders.

Pakpour further said the IRGC is in Syria and Iraq to prevent “the enemy” from reaching Iranian borders.

“If we don’t fight the enemy there [Syria and Iraq], we will have to confront them along our southern and western borders, as well as in Kermanshah [province],” he added.

Over the past few years and since the crisis broke out in Syria and Iraq, several members of the elite forces of Iran have been reportedly killed in clashes with “terrorists”, which suggested Iran’s military presence in both countries.

However, Iranian officials have constantly denied that their servicemen have boots on the ground in Syria and Iraq, saying the officers of the Islamic Republic are in Syria and Iraq as advisers at official request from both countries’ governments.