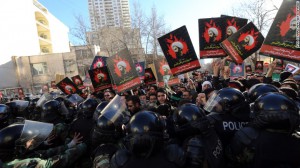 A six-nation Middle Eastern alliance agreed Saturday to characterize the recent attack on Saudi Arabia’s embassy in Tehran as an act of terror, strong language that marks an even further escalation in a tiff that has embroiled the region for days.

Foreign ministers from the six Gulf Cooperation Council met in the Saudi Arabian capital of Riyadh, after which the alliance’s Secretary-General Abdul Latif Zayani read a statement indicating that agreed to label last weekend’s incident as terrorism.

Zayani himself a few days ago referred to the Saudi Embassy as a terrorist act, so this terminology isn’t entirely new. Still, it is significant in that the six GCC countries — Bahrain, Kuwait, Oman, Qatar, Saudi Arabia and the United Arab Emirates — are now officially on the same page.

It also suggests that countries in the region aren’t acceding to requests from the United Nations, United States and other officials to tone down their rhetoric and refocus on other issues, like peacefully ending Syria’s civil war and dealing with ISIS.

That attack spurred Saudi Arabia to sever official ties with Iran, its longtime regional rival. Several other countries — most of them led by and/or containing mostly Sunni Muslims, like Saudi Arabia, as opposed to Shiite-led Iran — joined in. In that respect, this spat continues the schism that happened 14 centuries ago when Sunnis and Shiites split over who should succeed the Prophet Mohammed as Islam’s leader.

Iran, though, has stood its ground — even banning pilgrimages to Mecca and Medina as well as Saudi imports. President Hassan Rouhani called the angry reaction to Nimr’s killing “only natural” and slammed Saudi Arabia for severing ties in response.

“Of course, the Saudi government, in order to cover up its crime of beheading a religious leader, has resorted to a strange measure and has severed its ties with the Islamic Republic,” Rouhani said, according to Iran’s state-run Press TV. “Undoubtedly, such moves will never hide that great crime.”