You are here: Home / MidEastGulf / Iran, Russia to increase consultation for resolution of regional problems 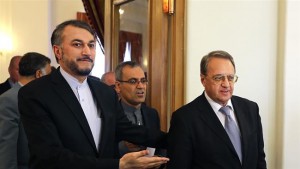 Iran’s Deputy Foreign Minister for Arab and African Affairs Hossein Amir-Abdollahian and Mikhail Bogdanov, Special Representative of the President of the Russian Federation for the Middle East and Africa stressed increase of consultations for resolution of regional problems.

Regarding acceleration of developments in the Middle East, increase of consultations between Tehran and Moscow is quite necessary, Bogdanov said during the meeting.
He called for increase of consultations between the two states’ high ranking officials.
Amir-Abdollahian for his part referred to Iran and Russia solutions for peaceful resolution of regional problems and urged continuation of talks between Tehran and Moscow for resolution of Syria crisis.
The official called for more serious action against the Takfiri terrorist groups.
Amir-Abdollahian arrived in Moscow on Monday morning. The ways for tackling terrorism and extremism, recent developments in Syria, Yemen, Iraq and the consequences of Zionist regime attacks on Al-Aqsa Mosque are among the issues to be discussed during his meetings in Moscow.