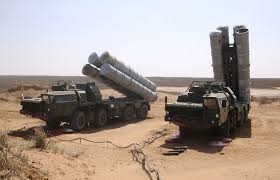 Reuters reports that Iran and Russia signed a contract for Iran to purchase S-300 surface-to-air missile systems from Russia.

“S-300, the air defense system, the contract has already been signed,” Sergei Chemezov, the chief executive of Russian state-owned defense conglomerate Rostec, said at the Dubai Air Show on Monday.

S-300 missiles are long-range, surface-to-air missiles, used mostly for defense against ballistic missiles or hostile aircraft. S-300 missiles are widely regarded as one of the top anti-aircraft missile systems currently in use.

In October, Rosoboronexport, a Russian state-owned weapons company, stated that it was working on a contract to supply Iran with missile systems. This was the most recent announcement in a string of multiple, contradictory reports about Russian and Iran collaborating on missile sales.