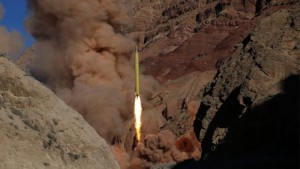 Foreign Minister Jean-Marc Ayrault said sanctions would be taken “if necessary”, following talks in Paris with US and European counterparts.

Iran drew strong criticism earlier this month when it launched several missiles as part of a military exercise.

In January, the US imposed sanctions on Iranian companies and individuals in response to a previous round of tests.

That move came a day after international nuclear sanctions on Iran were lifted as part of a deal designed to prevent it developing nuclear arms.

As part of the deal – agreed with world powers – a UN resolution that barred Iran from undertaking any work on ballistic missiles capable of carrying nuclear warheads was terminated.

However, a new resolution then came into force that “calls upon” Iran not to undertake such activity.

Speaking alongside Mr Ayrault on Sunday, US Secretary of State John Kerry described the recent Iranian missile tests as a breach of UN resolutions.

The US has asked the UN Security Council to discuss the matter on Monday.

Iran says its missiles are for use solely as a conventional deterrent. It says it has ballistic missiles with a range of 2,000km (1,250 miles), which means they would be capable of reaching Israel and US military bases in the Middle East.

In another development, Israeli Prime Minister Benjamin Netanyahu has called on the world powers that backed the Iran nuclear deal to punish Tehran for its recent missile tests.

He told a cabinet meeting on Sunday it would be “important as a test of the powers’ determination to enforce the nuclear deal with Iran, and we of course expect their responses”.