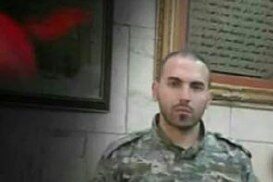 “IRGC leader Ibrahim Asami has been killed in Syria,” IRGC’s Brigadier, Rustom Ali Rafea, was quoted by IRNA as saying.

Rafea pointed out that Asami was killed “a few days ago”, adding that he was buried in the Iranian western province of Alborz.

Iranian forces have been supporting Syrian President Bashar Al-Assad in his battle against opposition groups which have been working to oust him since the start of the country’s civil war in 2011.