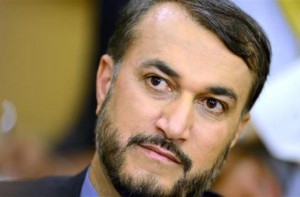 Iran has rejected Turkey’s plan for a buffer zone in Syria, saying it encroaches upon the territorial integrity and sovereignty of the Arab country.

“We consider the [idea of] establishment of a buffer zone inside Syria as a violation of the territorial integrity and sovereignty of this country,” Iranian Deputy Foreign Minister for Arab and African Affairs Hossein Amir-Abdollahian said on Thursday.

He said “unnecessary measures” like the idea of establishment of a buffer zone will only exacerbate ongoing crisis in the Middle East region.

“The security of Syria and its neighbors will be ensured on condition that certain players give up using terrorism as an instrument and also there would be serious determination for combating extremism,” he added.

In late July, reports said that Washington and Ankara have agreed to establish a buffer zone along the Turkey-Syria border in an alleged attempt to flush Daesh Takfiri terrorists out of the demarcated region and facilitate the return of the Syrian refugees to their homeland.

The United Nations has voiced concerns over the plan, saying Turkey should first guarantee the safety of the refugees in the area.

“What you don’t want to do is call something a safe zone, people flee to it, but it hasn’t got sufficient protection,” United Nations’ Under-Secretary-General for Humanitarian Affairs and Emergency Relief Coordinator Stephen O’Brien’s said.

Syria has been fighting against massive foreign-sponsored militancy since early 2011. The conflict has reportedly killed an estimated 240,000 people so far, including nearly 12,000 children.