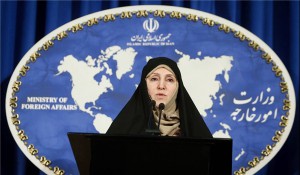 Afkham on Saturday underlined the need for an all-out fight against extremist ideologies, and meantime, voiced Iran’s readiness to exchange experience with Nigeria on fighting terrorism.

The Iranian spokesperson also expressed the Islamic Republic’s sympathy with the Nigerian government and nation as well as the families of the victims.

A bomb attack on Jambutu Juma’at mosque in the Eastern city of Yola on Friday killed at least 27 people and injured 100 others.

The bomb attack was the second in less than 24 hours on Muslims’ places of gathering. Twenty-eight people were also killed after an attacker detonated his explosives at a mosque in Maiduguri, the capital of the Northeastern Borno State, during the early hours of Friday.