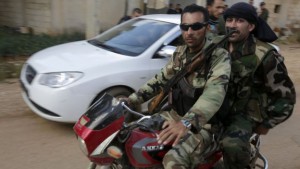 The new offensive launched by Syrian government forces in the countryside south of Aleppo has shed light on Iran’s growing role in Syria’s civil war.

Officially Iran denies it has deployed any combat troops in Syria, but a week before the offensive began, it was reported that hundreds of Iranian troops had arrived in Syria in preparation for an imminent assault on rebel-held areas.

At least one of them, Brig Gen Hossein Hamedani – the most senior Iranian military officer to have been so far killed in the Syrian conflict – lost his life near Aleppo.

According to Iranian media, 18 high-ranking IRGC officers have been killed in Syria in the past three years.

But the killing of four in just one week – particularly one just before a major offensive – implies that Iran may be more involved in the war than it has previously acknowledged.

In the past few days, some Iranian and Syrian media outlets have even published photos of Maj Gen Qasem Soleimani purportedly taken in Syria.

For the past year, Gen Soleimani – the commander of the IRGC’s overseas operations arm, the Quds Force – has been co-ordinating the Iraqi government’s operations against Islamic State (IS).

Several IRGC commanders have also warned that they would take revenge on “the terrorists” who killed Gen Hamedani, suggesting the force might have troops on the ground in Syria.

IRGC officials say that so far their most significant contribution to the defence of President Bashar al-Assad has been the creation of the paramilitary National Defence Forces.

Mohammadreza Naghdi, the commander-in-chief of Iran’s own paramilitary force, the Basij, said last week that funding for the NDF was overseen by Gen Hamedani.

In May 2014, the general himself announced that Iran had trained and organised 70,000 Syrians into 128 NDF battalions. A few days ago, IRGC commander-in-chief Mohammad Ali Jafari said the NDF now had 100,000 fighters.

Gen Hamedani also said that 130,000 Basij militiamen and women were ready to go to Syria if necessary.

It is not clear how many Iranians have travelled to Syria to fight, but Iranian media do sometimes issue casualty reports.

In June 2015, the official Irna news agency said at least 400 Iranian and Iran-based Afghan “volunteers” had been killed in the past four years.

Portraying them as “volunteers” may be an attempt to counter accusations that Iranian troops are involved directly in combat.

For possibly the same reason, most of the IRGC officers who have lost their lives in Syria have been described as “retired” or “former” members of the force.

In spite of such assertions, a senior politician has stated that Iran is prepared to join the war.

A few days ago, Alaeddin Boroujerdi, the chairman of the Iranian parliament’s national security and foreign policy committee, told a news conference in Damascus that Iran was ready to send troops to Syria if Mr Assad’s government requested them.

It is possible that the defeats suffered by the Syrian army in recent months and the increased worldwide concern over IS have prompted Iran to act.

However, Iran’s foes worry that the IRGC may also now be feeling emboldened by the results of the recent nuclear deal, which paves the way for the lifting of sanctions, likely benefitting the force with a source of fresh funds.