You are here: Home / MidEastGulf / Iran proposes regional anti-terror bloc to include Saudis 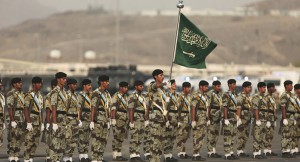 Iran has proposed the formation of a bloc of Muslim countries to fight terrorism and boost economic cooperation that would include its regional rival Saudi Arabia.

Parliament Speaker Ali Larijani told a security conference on Sunday that the two countries, along with Turkey, Egypt, Iraq and Pakistan, should join together to promote “regional peace” and defend the Palestinians.

Shiite-majority Iran and mainly Sunni Saudi Arabia are bitterly divided, and support opposite sides in the civil wars in Syria and Yemen. Saudi Arabia cut diplomatic ties with Iran in January after Iranian demonstrators stormed Saudi diplomatic facilities to protest the execution of a prominent Saudi Shiite cleric.

Saudi Arabia announced the formation of a 34-member “Islamic military alliance” against terrorism nearly a year ago, which excluded Iran.